Mid-century Portland architect John Yeon is the subject of an exhibition at the city's art museum. Here's a look at five buildings that demonstrate his Northwest modern style.

The son of a wealthy Oregon road builder, Yeon designed his first house aged 27 and became synonymous with Northwest modernism through a series of subsequent commissions.

Many of his built projects are listed on the US National Register of Historic Places, and the architect is also known for his conservation efforts in the region.

The exhibition at the Portland Art Museum examines the legacy of the architect, who passed away in 1994, aged 83. It includes drawings, models and photographs, along with art and design from Yeon's eclectic personal collection.

Titled Quest for Beauty, the show is supported by local design company Rejuvenation – which used Yeon's work as a reference for a recent lighting range – and runs until 3 September 2017.

Here are five of Yeon's most important projects:

Yeon's first architecture project remains his most famous. Designed when he was just 27, the home for his friend – lumber magnate Aubrey R Watzek – is an early example of the Northwest modernism style that the architect became known for.

It is located in the forested hills west of Downtown Portland. It boasted views of Mount St Helens, prior to its major 1980 eruption, and Mount Hood, before the native fir trees grew up around the property.

The house is built from local timber, and laid out around a central courtyard as a series of axes and viewpoints. Joinery and profiles are reminiscent of traditional Japanese architecture, while remaining minimal.

The University of Oregon's John Yeon Center now owns the house and operates it as a museum. The centre also manages the architect's 1950 Cottrell House across the street, and his 75-acre Shire landscaped site in the Columbia River Gorge.

During the late 1930s, Yeon worked with Watzek House builder Burt Smith to design and construct a series of homes from plywood. The experimental dwellings became known as the Speculative Houses.

Each modular design featured external plywood walls, a truss-less roof, and parquet flooring. A passive ventilation system built into the wall panels also allowed fixed panes of glass to be inserted between the frames above.

Nine of these houses were constructed in Portland and nearby Lake Oswego at a fraction of the cost of the Watzek House. One of the best preserved is located at 3922 North Lombard Street, Portland.

Yeon's only completed residence outside his native Oregon was a home for a California industrialist and his wife.

A series of staggered rectangular space form what the architect described as a "diagonal axis" through the building, which has almost no corridors.

Unlike the Watzek House with its bespoke-cut wood, the Vietor House was built entirely from stock lumber that Yeon lined up so openings would align with joints.

Vera Vietor used her will to bestow the house as the headquarters of the Humboldt Area Foundation, which serves the citizens of the area.

One of few civic buildings Yeon completed during his career, the visitors centre sits beside Portland's Willamette River. It was constructed in 1948 adjacent to a freeway, but now sits in the Tom McCall Waterfront Park.

The centre has a pinwheel layout used commonly by the architect, comprising a series of volumes that vary in height.

The colour of the building's plywood exterior panels has become known as John Yeon blue for its prevalence across his projects.

It is also known as the Rose Building after the city's flower, and acts as the headquarters for the annual Portland Rose Festival, as well as containing civic offices and a restaurant.

The Shaw House was the only fully fledged example of Yeon's Palace Style homes – designed to evoke the rooflines of Chinese pavilions, and described by the architect as "modular chinoiserie".

Situated on a five-acre hilltop site in Lake Oswego, the building was surrounded by a terraced landscape and looked out towards Mount Hood in the distance. Interiors lined in hemlock were bleached pink.

The home featured on the April 1953 cover of House Beautiful magazine, but was extended and remodelled beyond recognition in 2014 after the site was subdivided into 14 lots. 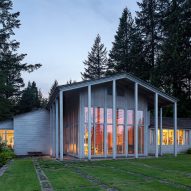