Architecture firm Caruso St John has transformed a Copenhagen warehouse into a wood-panelled studio, where the Kvadrat design team can develop their range of acoustic panelling.

London-based Caruso St John – which last year won the Stirling Prize for its Newport Street Gallery – was tasked with renovating a space in the Danish city's industrial harbour area to create the space for Kvadrat Soft Cells.

To start, the warehouse was stripped back to its concrete shell. Old wires and pipes were removed, and the concrete was repaired and painted white.

The architects then used large panels of oiled spruce to partition up the six-metre-high space, creating a layout that includes large workspaces and meeting rooms, but that can also be opened up for bigger events, as required.

Along one side of the warehouse, the spruce lumber boards form the walls, floors and staircase of a two-level structure. Similarly, at one end of the space they create a large wall of storage that divides the main atelier from another workspace.

The wood panels also form a system of sliding doors across both levels.

"The project is meant to provide a flexible background for Kvadrat Soft Cells to pursue its ambitious and ever-evolving plans," said Caruso St John, which is led by architects Adam Caruso and Peter St John.

The original concrete floor is now polished, revealing its aggregate. The designers call it "a type of industrial strength terrazzo".

Kvadrat Soft Cells acoustic screens – which are cut, assembled and upholstered by hand at the brand's Poland factory – are installed on walls and ceilings to help reduce the echoes in the old warehouse.

A walnut worktop features in the kitchen, as well as in the individual studio spaces – a reference to the original warehouse windows.

Furniture is purposefully mismatched, blending new pieces with objects dating back to the 1960s, while wall mountings offers space for large rolls of fabric.

"By turns irreverent and sensitive, the refurbishment expresses an effortless juxtaposition between old and new," said Kvadrat.

Kvadrat is one of the world's leading textile manufacturers, and frequently works with leading designers. Past collaborators have included Raf Simons, Ronan and Erwan Bouroullec, Doshi Levien and Richard Hutten.

This is the first collaboration between Kvadrat and Caruso St John, which is better known for museum and gallery projects like the revamp of Tate Britain and the Nottingham Contemporary gallery.

Both companies ranked highly on the inaugural Dezeen Hot List – Kvadrat at number 180, and Caruso St John at number 58. 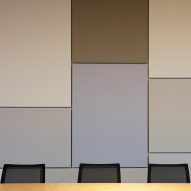 Photography is by Patricia Parinejad.