A group of scientists from California have developed a series of organic electronic components that will harmlessly dissolve into their environment after use.

Led by Stanford Professor of Chemical Engineering Zhenan Bao, the team's inventions include a biodegradable semi-conductive polymer, disintegrable and flexible electronic circuits, and a biodegradable substrate material for mounting these electrical components onto.

Totally flexible and biocompatible, the ultra-thin film substrate allows the components to be mounted onto both rough and smooth surfaces.

All together, the components can be used to create biocompatible, ultra-thin, lightweight and low-cost electronics for applications as diverse as wearable electronics to large-scale environmental surveys.

Crucially, when the electronic device is no longer useful, it will biodegrade into non toxic components that are harmless to the human body and environment.

While the organic electronic circuits are made from iron – chosen because of its non-toxic properties – the thin film substrate was developed from cellulose. This allows the electronics to be worn on the skin and potentially implanted inside the body, subject to further testing.

As well as the components' potential for being used on and inside the body, the team suggests that the electronics could be used to create biodegradable surveying devices that could dropped by aeroplane across remote locations to survey the landscape without harming the environment.

The researchers – who hail from Stanford University, University of California and Hewlett Packard Enterprise – were spurred to create the biodegradable devices after witnessing how the colossal demand for electronics has led to a huge amount of waste, not to mention rapid consumption of scarce elements like gallium and indium.

Having realised the urgent need for environmentally friendly and bio-integrated organic electronics, the team set about developing a semi-conductive polymer and electronic circuit that could mimic the stretchable, self-healable and biodegradable properties of human skin.

"Increasing performance demands and shorter use lifetimes of consumer electronics have resulted in the rapid growth of electronic waste," said the team in its research paper, published in Proceedings of the National Academy of Sciences. "Currently, consumer electronics are typically made with non-decomposable, non-biocompatible, and sometimes even toxic materials, leading to serious ecological challenges worldwide."

While other flexible, ultra-thin electronics already exist, the organic electronics developed by Bao and her team, are the first to be totally biocompatible and biodegradable.

The main drawback of these polymers is the relatively low electrical performance compared with traditional silicon based electronics.

Ting Lei, the paper's lead author and a postdoctoral fellow working with Bao, told Dezeen: "Currently we are working on further improving the performance of these polymers. The next step also includes the scalable fabrication of the degradable electronics and broadening the applications of these degradable polymers into different applications, such as chem/bio sensors and even more complicated electronics."

Our new Pinterest board highlights the growing wearable technology industry. Featured products include a touch-sensitive denim jacket launched at this year's SXSW tech conference in Austin, smart temporary tattoos that can control devices and a sports bra that gives wearers feedback on their workout. 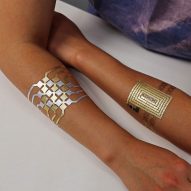