A pair of interlocking volumes clad in pale brick and fronted by large, frameless windows extend the rear of this Victorian house in west London, which has been overhauled by McLaren Excell.

Local studio McLaren Excell was tasked with renovating the property and a former stable yard in the Richmond area of London to create a house with a more open and connected interior.

To achieve the space required by the owners of Kew House, the architects proposed an extension comprising a pair of chamfered forms with pitched roofs that intersect to create a complex collision of planes.

"The simplicity of the exterior belies the complexity of concealed structures, interlocking pitched roofs and wedge-shaped walls, all neatly resolved so as not to compromise the purity of form," said the studio.

The exterior treatment of the extension is intended to offer a contrast to the painted rear facade of the Victorian house, and to lend the new volumes a sense of mass and robustness.

The pale-brick walls are treated with a lime mortar that has been roughly brushed across the surfaces to further lighten them.

Angled concrete plinths provide a solid base for the brick volumes, which feature slanted window and door reveals that accentuate the depth of the walls.

Internally, the two volumes form a seamless space featuring several openings that are positioned to frame specific views of the garden and a magnolia tree at its centre.

The compound forms of the intersecting roofs are reflected in a ceiling landscape featuring sharp lines and shadows that are enhanced by the inclusion of a large skylight.

The ground floor is completely opened up and features a concrete floor that unifies the old and new spaces, flowing through from a reception at the front of the house to the kitchen and dining area in the extension.

Concrete was also used to construct a central core containing the stairs, a washroom, storage and kitchen units, as well as a monolithic kitchen island and surfaces in the bathroom upstairs.

The dark, patinated concrete contrasts with extensive wall panelling and joinery in oak that introduces a softer, natural tone and finish to the interior.

The wall panelling conceals storage and incorporates bench seating, including in the deep window sills. Fluted detailing provides a decorative relief that helps to break up the surfaces.

The joinery extends into the older part of the house, where wooden shutters that wrap around in front of the reception room's windows offer a modern counterpoint to the traditional cornicing.

A solid oak staircase illuminated by a skylight ascends to two upper floors containing bedrooms and bathrooms that feature the same combination of wood, dark surfaces and white ceilings.

McLaren Excell's previous residential work in London includes a weathered steel and concrete extension to a Victorian property and a home in a converted office featuring smoked-oak furnishings and marble bathrooms. 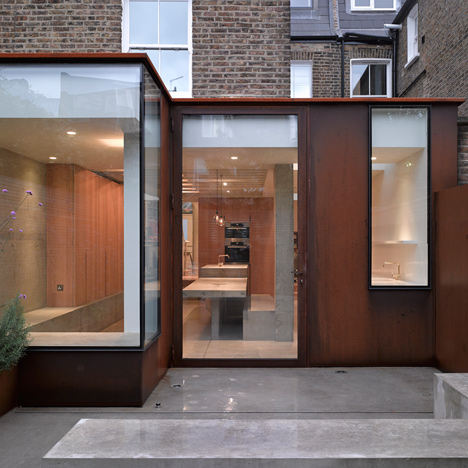