The huge skeleton of a blue whale is now the centrepiece of the entrance hall at London's Natural History Museum – but unlike the dinosaur cast there before, it is suspended from the ceiling, freeing up space below for an information desk that doubles as a bar.

London interiors studio Casson Mann overhauled the foyer as part of an ongoing renovation of the historic museum. The 25-metre-long whale replaces the bronze diplodocus cast – nicknamed Dippy by locals – that has stood in the space for the last three decades, but which is now going on tour.

Underneath the whale, a white marble plinth acts as an information point by day and a bar by night.

The Natural History Museum is the latest of Kensington's cluster of museums to under a signifiant overhaul.

The Design Museum relocated to a new home in the revamped Commonwealth Institute late last year, while the V&A museum opened a new wing last month – and each has its own events space for hire. This renovation will allow the Natural History Museum to compete.

"We have always been one of London's premier venues for events hire," a spokesperson for the Natural History Museum told Dezeen. "We're trying to make it a more workable space for visitors, and match the likes of the V&A with their atrium, which is quite a welcoming experience when you walk in."

"The number and scale of events we can host will not change in future, but we do hope that by breathing life back into Hintze Hall we will maintain our position as an attractive destination for decades to come."

Casson Mann's design involved reorganising the entire layout of the space. The studio's aim was to achieve an uncluttered appearance that celebrates the Romanesque architecture of the grand hall, which was devised by English architect Alfred Waterhouse in the mid 1800s.

"Our starting point for this was try to get back to how fabulous the building is," studio co-founder Roger Mann told Dezeen during a tour of the space.

"Over the years, all the different iterations of displays, and information and desks had got a bit ill-considered as a whole, so the starting point was to strip it right back to enjoy the amazing building that it is."

Specimens on white marble plinths or in large glass vitrines are now tucked neatly into niches, or "wonder bays", around the edges of the hall. This means the whale, suspended from the ornamented arches, becomes even more of a focal point when visitors walk in.

Animals included in the bays on the left side of hall correspond to the museum's extant displays in the west wing, while extinct species are housed in the niches to the right, indicating the collections of the east wing.

"We didn't want to have anything poke out too much so they're a bit of a treat and a surprise as you penetrate into the hall," said Mann.

The £12 million needed to renovate the Natural History Museum has come from philanthropic donors, including £5 million from British-Australian Michael Hintze, whom the entrance hall is now named after.

"It's a lot of philanthropic money rather than public money, which is obviously something in the current climate we're having to move towards," said the Natural History Museum spokesperson.

Allowing the space to host private events will also provide a significant source of revenue for the museum.

Other cultural centres across the capital have recently benefitted from hefty philanthropic donations, including the Tate Modern, which received its Herzog & de Meuron extension thanks to Ukrainian-born American businessman Len Blavatnik, who was also the funder of the V&A's new extension.

The Royal Academy of Arts also recently announced the addition of a new architecture gallery as well as two architecture prizes, funded by a seven-figure donation from British entrepreneur and Travelex founder Lloyd Dorfman.

Casson Mann was appointed to the project in 2013, after the success of the Treasures Gallery it completed in 2012. The renovation of Hintze Hall is part of a wider range of works to update the museum, which was last refurbished in the 1970s.

Niall McLaughlin Architects and landscape firm Kim Wilkie are currently working on an overhaul of the Natural History Museum's entrance areas, with the addition of a subterranean cloister, a wildlife garden and a public plaza.

A flight of new steps will lead up to the entrance of the museum from Exhibition Road, facing the new Sackler Courtyard at the V&A museum across the road. 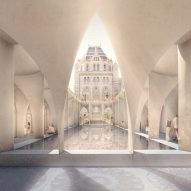