Researchers at software brand Adobe have developed a prototype tool that allows users to mix colours on screen as if they were working in real paint.

Playful Palette offers artists and illustrators an alternative to the standard colour picker that most graphics software, such as Adobe Photoshop, relies on. Users would be able to blend colours more easily and compare different shades.

The tool is based on research into the ways artists work in traditional media – and the shortcomings they experience with digital counterparts.

The Adobe Research team set out to create a user interface that could replicate the variations of a physical palette, with the ability to mix colours and compare combinations of shades.

"Choosing and composing colours is a critical part of any painting process," the Adobe Research team of Maria Shugrina, Jingwan Lu and Stephen Diverdi wrote in a paper on the subject.

"We conducted a pilot study that found artists interact with their palette several times a minute, and many of the interactions, such as exploring harmonising colours, are not well supported by digital colour pickers."

The Adobe Research team explain how Playful Palette emulates the physical experience of mixing paint in this video.

Playful Palette is designed in contrast to the usual sliders or swatches that many apps rely on. Instead, it allows dabs of colour to be added, moved, blended with other colours or completely deleted. Blobs are moved by touching and dragging, to recall the tangibility of real paint and paper.

A ring surrounds the palette and records a history of shades used – allowing the user to easily return to them. Entire colours can also be selected and swapped out for new ones, allowing the details of an image to be updated all at once. Playful Palette can also record an infinite number of "dishes".

"Suppose an artist is painting a still life with a vase and fruit," added the team. "Even if the scene is set before him or her, painting involves more than replicating colours."

Although the team is not able to comment on whether Adobe has plans to integrate this into its software, their design points to one potential future direction for the company.

The Adobe Research labs explore potential future features for the company's software, including new technology such as machine learning. They also collaborate on projects with universities around the world, which are often published in peer-reviewed journals.

Adobe Research – which has labs in the US cities of San Jose, San Francisco, Seattle and Cambridge – was responsible for Photoshop CS5's Content-Aware Fill feature.

Several designers are currently experimenting with products that blur the lines between the digital world and the tangibility of real life.

British studio Those created drawing robot Joto, a robotic arm on a whiteboard that draws everything from illustrations to shopping lists, while Durrell Bishop and Robert Poll's similar Line-us robot replicates images drawn on a touchscreen device on paper. 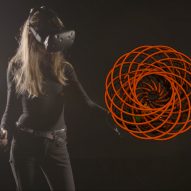