These new images by British photographer Paul Raftery reveal the post-Soviet-era architecture that can be found in Kazakhstani capital Astana, which is hosting the world expo this year.

The photographs show buildings that can be found in the downtown area of the city, from simple tower blocks to highly decorative structures.

With Astana Expo 2017 taking place across the summer, this architecture has been put under an international spotlight. Raftery's aim was to showcase how the city, which was behind the so-called Iron Curtain, has evolved since the fall of communism.

"Astana is a new, planned capital, a bit like Brasilia, and so has no Stalinist architecture to speak of," Raftery told Dezeen. "What it does have in the downtown business and government district is a crazy array of architecture."

Located on the banks of the Ishim River, within Kazakhstan's northern Akmola Region, the city was founded by a unit of Siberian Cossacks in 1830, and was an important city within the Kazakh Soviet Socialist Republic from 1936 to 1991.

Following the dissolution of the Soviet Union, Astana became the capital of the Republic of Kazakhstan in 1997, replacing the previous capital Almaty, which is also the country's largest city.

In 1998, Japanese architect Kisho Kurokawa was awarded the project to masterplan the new capital. His proposal aimed to redevelop the existing city, and create new areas to the south and east of the river based on principles of metabolism and symbiosis.

The office of the architect, who died in 2007, continues to work with chief planner Vladimir Laptev on realising the vision of a futuristic city at the heart of Central Asia.

Intense building activity is taking place in the downtown area between the railway line and the Ishim river, as well as in a new diplomatic district south of the river that should be completed by 2030.

Laptev has compared the plans for Astana to the layout of Berlin, with rivers and parks introducing natural elements to an ambitious scheme that is seeing the Soviet-era buildings replaced with new structures.

"Here was a newly free nation of vast size, that had built its capital city afresh and was trying to create an identity through its architecture," said Raftery.

Among the buildings photographed by Raftery is the Akorda Presidential Palace, which opened in 2004 and is the official workplace of the President of Kazakhstan. Its blue and gold dome is topped with a spire reaching a height of 80 metres.

The main axis leading towards the palace is flanked by a pair of golden glass towers. Looking in the opposite direction, these towers frame a view of the iconic Beyterek Tower, with its golden sphere supported by branch-like girders.

Situated at the precise centre of Astana, the 62-metre-high pyramidal Palace of Peace and Reconciliation was designed by Foster + Partners in 2004. It contains the national opera house, a museum of culture, art galleries and other visitor attractions.

Next to the pyramid and surrounded by fountains is the white-marble Kazakh Eli monument, which is around 100 metres tall and is topped with a golden representation of the mythical Samryk.

The Hazret Sultan Mosque located on the right bank of the Yesil river is the second largest mosque in Central Asia, with capacity for 5,000 worshippers. It was constructed in the classic Islamic style and was completed in 2012.

Other structures captured by Raftery during his visit include the curving, gold-windowed House of Ministries, the railway station with its large clock tower, the blue-glass fronted Kazakhstan Parliament buildings, and the Astana Music Hall, which has a mosaic-clad upturned jar leaning against it. 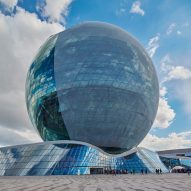