The Astana Expo opened to the public last week in the Kazakhstani capital. These images by architectural photographer Paul Raftery reveal the myriad pavilions on display, including the UK offering designed by Asif Khan and Brian Eno.

Raftery took the photographs at the opening of the Astana Expo 2017, where over 100 countries are presenting exhibitions and pavilions under the theme Future Energy.

The event takes place on a 173-hectare site, which was masterplanned by Chicago firm Arian Smith + Gordon Gill Architecture.

The centrepiece of the grounds is Kazakhstan's National Pavilion,designed by Smith and Gill – a glass globe sat atop an undulating glazed podium. One hemisphere of the building is completely see-through, while the other is translucent.

Inside, tiered terraces with wavy edges stretch out towards the glazed facade to give visitors views out over the site.

The globe is flanked by two matching buildings with two faceted mirrored facaded and curving awnings.

The Spanish pavilion, designed by Frade Arquitectos, features a large model of a tree surrounded by red house-shaped exhibition spaces.

British architect Asif Khan worked with musician Brian Eno on the design of the UK pavilion titled We Are Energy.

Eno created a soundscape for the pavilion, which explores the creation of energy, beginning with the origins of the universe almost 14 billion years ago and culminating with present-day energy production.

The Austrian pavilion, designed by Johann Moser and his firm BWM Architects, hosts a range of interactive installations that encourage visitors to use their own bodies to produce energy, including a room filled with stationary bicycles.

Meanwhile, the interior of the Turkmenistan pavilion is decorated using a motif of the Rub el Hizb, an eight-pointed star.

Expos, also known as "world fairs", have in the past produced iconic pieces of architecture – from the Eiffel Tower in Paris to the Seattle Space Needle, which is about to be refurbished.

The last expo took place in Milan in 2015, where highlights included a tranquil garden designed by architect Anne Holtrop for Bahrain, a glowing beehive designed by Wolfgang Buttress for the UK and a "handcrafted dragon" by Daniel Libeskind. 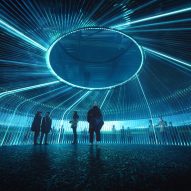 Other recent expos inlcude the Yeosu Expo 2012 in South Korea and the Shanghai Expo 2010, which featured Thomas Heatherwick's Seed Cathedral.