London Design Biennale director Christopher Turner has been appointed to lead the architecture and design department at the V&A museum.

Turner, is also deputy director of the London Design Festival, will become the keeper of design, architecture and digital at the London museum in October. He takes over from Kieran Long, who left the position earlier this year.

He will be responsible for the Rapid Response Gallery, where the museum showcases objects collected as soon as they became newsworthy, rather than retrospectively. Recent acquisitions have included the flag of the Refugee Olympic Team and the Pussyhat worn on the Washington Women's March.

He will also oversee the museum's architecture and design programme, and will lead the V&A's contribution the next Venice Architecture Biennale.

Turner previously served as editor for UK design magazine Icon and New York magazine Modern Painters. He has curated exhibitions at the Cabinet gallery in Brooklyn, Manifesta 7 in Tyrol, the Arnolfini Gallery in Bristol and the Architecture Association in London.

He has also authored the book Adventures in the Orgasmatron: How the Sexual Revolution Came to America. 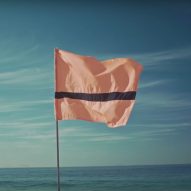 "Christopher has a wealth of exceptional experience in the design world, both as an editor of leading arts titles, as well as championing the very best of international contemporary design to audiences in London through the London Design Festival and the London Design Biennale," said newly appointed V&A director Tristram Hunt.

"This range of experience means that he is perfectly placed to lead our team of world experts in the fields of architecture, product design and digital design," he continued. "He already has an established association with the V&A through the London Design Festival, which has collaborated with the museum as a central hub for nine years."

Turner will work alongside Corinna Gardner, who has served as acting keeper since Long left. Other V&A curators include Disegno founder Johanna Agerman Ross, who joined the museum in June 2016.