Architecture studio Cooke Fawcett has built an elevated walkway atop a multi-storey car park in south London, a space that is also used as an open-air gallery by arts organisation Bold Tendencies.

Called the Peckham Observatory, the steel-framed structure stands like a table over the entrance to the rooftop, which is also the venue of Frank's Cafe – a campari bar covered by a red tent-like awning.

At 35 metres long, the new walkway spans the full width of the building. Visitors arriving onto the roof emerge underneath its wooden deck, via the lurid pink stairwell that forms the venue's entrance.

The decking and steps are made from single lengths of mangueira hardwood, that lend the structure the appearance of a beachside boardwalk.

The metalwork is painted a murky sap green that aims to compliment the car park's original structures, as well as the midnight blue ticketing booth Cooke Fawcett tucked beneath it.

Oliver Cooke and Francis Fawcett set up their practice Cooke Fawcett in 2015 after working together on Herzog & de Meuron's extension to the Tate Modern gallery in London and the Blavatnik School of Government in Oxford.

The pair were commissioned for this project by Bold Tendencies, which gallerist Hannah Barry set up in 2007. The organisation hosts an art programme in the disused parking bays and roof of the car park from May until September each summer, although its future is now threatened by the car park's redevelopment.

Today, the roof of the multi-storey car park has become as famous for its spectacular views towards the city as for its site-specific artwork. Proceeds from Frank's Cafe, designed by Lettice Drake and Paloma Gormley of Practice Architecture in 2009, help fund the arts programme.

With the Peckham Observatory, Cooke Fawcett's aim was to emphasis the often overlooked views towards the hilly south of the capital.

The deck cantilevers over its steel legs at both ends, on one side offering a view out over south London and down to the alley where a queue typically forms to access the venue.

By raising the platform 3.5 metres above the roof, visitors can catch glimpses over the Bussey Building next door to the hilltop Dawson's Heights estate designed by Kate Macintosh in the 1960s, and down to the train tracks that run into Peckham Rye station.

To the north, a broad flight of steps offers a perch from which to admire the jagged skyline of the city, with the Will Alsop-designed turquoise library in the foreground.

Looking east over the car park itself gives visitors a new perspective on the temporary art installations commissioned for the space – this year a group of lion sculptures by Ewa Axelrad and a set of poll-mounted wigs by artist Isaac Olvera.

Later, wooden drinks ledges will be installed along the edges of the walkway to provide an ideal people-watching spot.

It is hoped the walkway will also double as a platform for performances and artworks in future summers.

"It's more like part of the infrastructure of the car park," Cooke told Dezeen at a press preview of the Peckham Observatory last week.

"For an avant garde cultural institution now in its 11th year, it is important that Bold Tendencies retains the capacity to reinvent and present new experiences to its loyal following as well as to new visitors," added Fawcett.

This is the second commission the duo have completed for the space, having previously designed a plywood backdrop for the venue's live music performances named the Concert Wall on the floor below.

Southwark Council is currently redeveloping the lower levels of the car park, which will ultimately bring an end to the Bold Tendencies programme.

"There's a time and there's a place," Barry told Dezeen, suggesting that, at the end of the organisation's current two-year lease, she may call it a day.

Barry and Spanish practice SelgasCano narrowly lost out on a bid to convert the car park into 800 studios to cater to the area's burgeoning artist population. 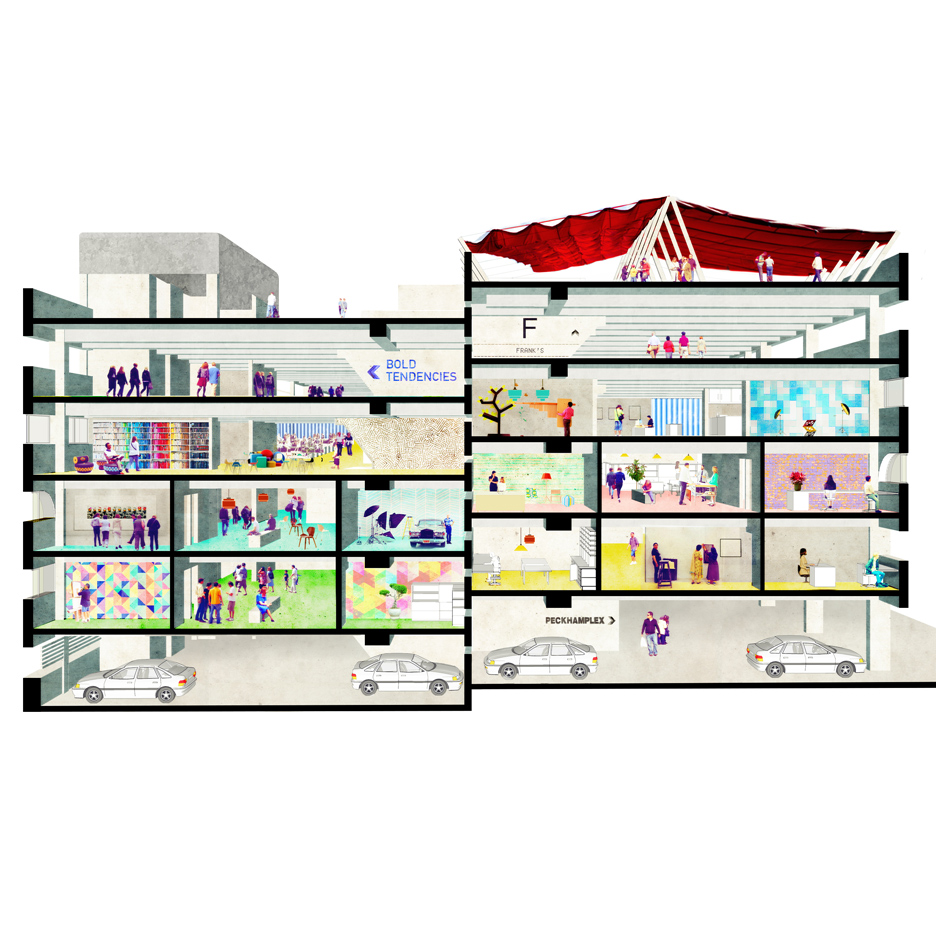 Instead, architect Carl Turner is working with the property developers The Collective to convert the space to offer a range of workspaces, which will be called the Pop Community. The project aims to build on the success of Turner's Pop Brixton, a shipping container village for startups in the south west of the capital.

"We want to create a space that is more permeable than a specifically art-centric building, so it's a bit more open and doesn't rely on you having a degree in Fine Art to get a space there," Turner said previously.