Furniture and product design students from The Cass have created pasta inspired by nipples, pocket squares and rose petals for restaurant chain Carluccio's.

The Cass, London Metropolitan University students were asked to design pasta shapes by their tutor Peter Marigold, who wanted to get them thinking about "pure simple forms".

"This might be considered a strange request for a product designer, but by focusing their attention on such a small and simple object, they are able to take complete control of its character – not just how it looks, but the narrative behind its creation," he said.

Marigold approached Carluccio's "for a laugh" to judge the final shape, and found the company was surprisingly enthusiastic to see what furniture designers could do with pasta.

The chain's 80-year-old founder, Antonio Carluccio, even attended the final exhibition to discuss the designs with the students, who based their projects on everything from Italian folklore to the contemporary tools used to make pasta.

Each form needed to be distinct from the more than 600 existing types of pasta, and also keep its shape and cook evenly.

Ella Merriman's Befannas pasta resembles a woman's headscarf, and borrows from the Italian Christmas story of La Befana – an old woman who delivers presents to children. Her triangular scarf has been recreated in miniature, with each piece crimped at the base to echo the knot tied under the chin.

Others experimented with various types of folding, including Nicholas Marschner, who created pasta designed to let the sauce "seep deeply" into the shape.

Other students experimented with different kinds of braiding, including taking inspiration from sailors' knots

Marigold said that the school is now in discussion with Carluccio's to see if any of the pasta shapes would be appropriate for production in its factories. Four of the students have been personally invited to Antonio Carluccio's home to further test their shapes by cooking him dinner.

The restaurant chain started out in 1991 with a food shop in London's Covent Garden that specialised in imported Italian food. In 1999 it opened its first eatery and now has over 100 restaurants across the UK.

MIT researchers have also been experimenting with pasta, designing a set of shapes that go from two-dimensional to three-dimensional when dunked in water. 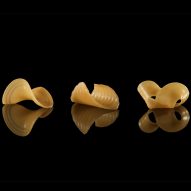