Brunel University graduate Imogen Adams has created a portable allergen tester designed to put people with food intolerances at ease during meals out.

The palm-sized gadget, called Ally, takes its name from a play on the words "allergies" and "ally", as in "friend". It allows users to quickly detect any harmful substances that can provoke their food allergies.

Adams, a bachelor's student in Product Design Engineering at Brunel University, designed her prototype to detect lactose, but future versions could be tailored to other irritants such as nuts, wheat, seafood or meat.

The designer told Dezeen that the device is cheaper to manufacture than other food-allergen testers on the market.

"This is far more cost-effective than the only other allergen-checking device on the market, Nima," she said. "Nima tests for the presence of gluten, but each test retails at around £4.50, and the device itself costs £250."

To use Ally, the user crushes a small food sample and a few drops of water inside a small silicone pod. They then dip a test strip into the mixture and insert the strip into a slot on the side of Ally. These strips are a modified glucose test strip, containing lactase enzyme on half their surface.

If lactose is present in the sample, the strip will change colour, with a greater level of change indicating a higher concentration of the sugar, commonly found in milk. A sensor in the device processes this information.

Adams has also designed an app to accompany the Ally device, which connects to the user's phone via Bluetooth. The user pushes a button in the middle of the device to begin the test, which the app takes 60 seconds to process.

The test results appear in the app, but if the user would prefer to not look at their phone at the table, Ally also gives off a quick vibration to signal a positive or negative result.

The user has the additional ability to log their results in the app, share them with an online community, and leave reviews about how allergy-friendly certain restaurants are.

The gadget's doughnut-like shape and small size were influenced by considerations of portability and accessibility.

"I wanted the device to be small enough to be discreet, but not small enough to lose," Adams told Dezeen. "The design is simple and minimalistic with only one button to allow it to be as intuitive to use as possible."

The basic Ally model is made from polypropylene, with optional exterior finishes of stainless steel and walnut wood.

Adams was granted funding from the James Dyson Foundation at the beginning of the year, and Ally was also exhibited as part of the New Designers showcase in London earlier this July. 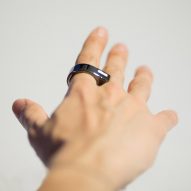