American firm Marlon Blackwell Architects has created a bright red medical facility for children that is meant to stand apart from its bland, suburban-style neighbours.

The Harvey Pediatric Clinic is located on the main commercial corridor in Rogers, a town in northwest Arkansas that is dominated by suburban development. The medical building's irregular shape and red facade are meant to contrast with the "weak forms" and "beige tones" surrounding it.

"Situated in a land formerly dotted by the silhouettes of singular objects such as barns, sheds, silos, RV vehicles and semi-trucks, the building is a biological cousin to these different typologies," said Marlon Blackwell Architects, a prominent Arkansas firm established in 1990.

The design also helps reinforce the identity of the progressive clinic, which seeks a holistic approach to treating children. "The building complements the practice, elevates the medical office typology and delivers a high-quality, efficient space enclosed in a bold figure," the studio said.

Rectangular in plan, the two-storey building consists of a glazed lower level and an upper portion that is wrapped in metal panels. Protruding from the roof is an angled volume that contains a double-height room and mezzanine. Its shape corresponds with a similar volume on the ground level, which houses a stairwell.

The team carved a void into the lower level that serves as a drop-off area for patients. Both sides of the drive-through breezeway are lined with glazed walls. "Spaces on either side of the pass-through are wrapped in glass, providing a connection with the surrounding landscape and establishing a visual and material separation from the upper floor," the team said.

Different facade treatments were used for each side of the facility. On the south, the upper portion is wrapped in metal panels painted bright cayenne – a hue that was developed specifically for this project. The same vibrant colour was used one side of fins on the east facade, which help shade a glass wall and minimise heat gain.

On the quieter, north side of the building, the architects used standard weathered-zinc panelling. "A ribbon window reinforces the horizontality of the form, and the darker, cool grey recedes, giving emphasis to the saturated, warm colour used on the south figure," the team said. Grey metal panels were also used on the west facade.

Inside the 15,000-square-foot (1,394-square-metre) facility, the ground level contains private offices for paediatric specialists, along with a staff break room that opens onto a small garden. The upper storey houses the clinic.

A stairway leading to the clinic features a skylight with blue glass, which provides a cool, soothing atmosphere. "The colour creates a vertical threshold that suggests a place of healing lies above," the architects said.

The team focused on creating a clear circulation path within the clinic. Sixteen examination rooms are situated along a loop-shaped corridor, with the waiting room and check-out areas both located on the east end of the loop. "Skylights over the two nurses' stations, which are distributed between the exam rooms, bring ample natural light into the centre of the building," the team said.

Administrative functions, including meeting rooms and a flex space, were situated in the western portion of the clinic. Stretching along this side of the building is a covered porch, which serves as place of respite for doctors and staff.

The building has made the shortlist for the 2017 World Building of the Year Awards in the health category. Other projects by Marlon Blackwell Architects include a pool house with wooden cladding and bands of glazing. 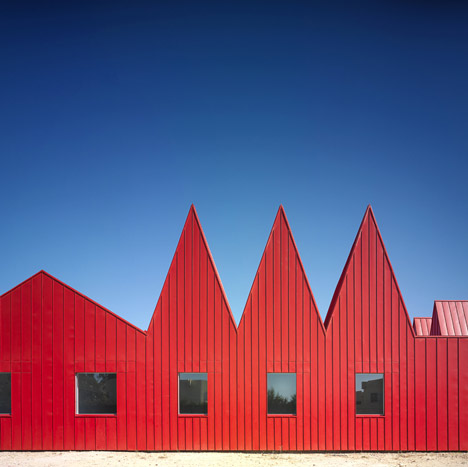