MAD co-founder Ma Yansong says that Chinese cities should draw more from the country's traditional architecture, rather than aping the style of western buildings, in the second part of our exclusive video interview.

Ma says that looking at the philosophy of traditional buildings could help the country develop a contemporary style that is uniquely Chinese.

Ma, who heads up Beijing-based architecture firm MAD, says that the rate of development in China has been so fast that it hasn't allowed time for a new form of Chinese architecture to emerge.

"Development in China is massive – the speed and quantity doesn't allow you to think too much and so the easy way is to take experience from other places," he says in the movie, which Dezeen filmed for the Royal Institute of British Architects at the RIBA International Conference in London.

"That is why a lot of [Chinese] cities are still copying cases from other countries. Many [western] urban images become the ideal for many Chinese cities."

However, Ma believes that there is a lot to learn from the architecture of China's past.

"China has some cities, traditional cities, with a long history," he says. "They are so beautiful and they were planned so smartly. I call them gardens on the city scale. For example, Beijing has mountains, waters, lakes, bridges, towers. It was a very poetic city."

"How can this traditional philosophy – which I think is very advanced – transform future cities?" he asks. "I think that leads us to a new route, besides the western typology."

He gives MAD's Chaoyang Park Plaza as an example of how his own firm is trying to draw on Chinese tradition to create contemporary buildings.

The project, which is due to be completed this year, is a 120,000-square-metre complex of skyscrapers, office blocks and public spaces located in Beijing's central business district.

Sitting on the southern edge of Chaoyang Park – one of the largest parks in the city – the form of the buildings is based on rock formations.

"Chaoyang Park Plaza is about how to carry the traditional culture into a new format in modern architecture," Ma says.

The project is an example of Ma's "Shanshui City" theory, an approach to large-scale architecture that is intended to rethink how cities and their inhabitants can reconnect with the natural world.

"[I want] to make big architecture become landscape," Ma says. "Not just the shape, but also the experience [of the buildings].

In the first part of Ma's video interview with Dezeen, he said that architects must be more critical and visionary, rather than cozying up to developers. 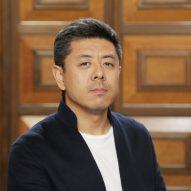 Ma Yansong: "Architects need to talk about what the future is"