The Wu collection includes five tea sets, originally made for an exhibition during London Craft Week. It was created after Native & Co was approached by Taiwan's ministry of culture to create a contemporary take on traditional tea drinking.

The studio designed a tea experience that would showcase the varieties of oolong – which Taiwan is particularly known for – by pairing five clays with five different leaves. Tea is typically brewed in small, unglazed teapots that improve the drink's flavour over time as the porous clay becomes seasoned by the tea.

"On a microscopic level, the clay's surface is rough and uneven, trapping pockets of air and tea within it," explained Native & Co's Chris Yoshiro Green. "This creates a more rounded and layered taste profile."

"Each clay varies in its texture, and porosity levels vary the flavours further."

The studio experimented with different clays as well as water mineral content, the teapot's shape, and brewing time and temperatures to create matches for the five different teas. Once paired, each teapot was "seasoned" to ensure consistent brews.

Native & Co chose clays that would especially complement the aromas and flavours of each oolong, using them to create ultra-minimal teapots and cups that still retained a "Taiwanese air".

Light clay was paired with a floral and fruity-flavoured tea to retain its delicate layers, while more mature oolongs were matched with a heavier clay to "smoothen and fill its rounded taste".

The distinctive milky aftertaste of a Taiwanese high mountain Oolong was paired with a traditional pear-shaped teapot, made from red porous clay.

"The pairing of tea with clay is much like tea brewing, where there is a balance of traditional technique and personal preference," said Green. "For Wu our focus was to instead bring attention to each of the Oolongs' natural and distinctive flavour queues rather than enhancing them."

The theme of Wu, which means five in Mandarin, was extended to the surrounding exhibition at the Herrick Gallery in Mayfair, which included a tea bar with just enough space for five guests. The space was decked out with muted colours, timber panelling and shelves, and urn-like canisters placed on wooden columns.

"One of our key aims was to present traditional Taiwanese tea culture in a more contemporary relatable and seductive way," added Green, who founded Native & Co with Taiwan-born Sharon Jo-Yun Hung.

The studio launched a London store in 2014 to showcase classic and contemporary design from Japan and Taiwan, and has since expanded to launch its own collection of furniture and tableware.

Chinese brand Defront has also made put a contemporary spin on traditional tea culture, with a minimal tea service aimed at a younger generation. 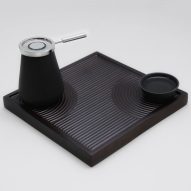