Using the Musician's Mirror, performers select parts of their body to track, and create presets for good and bad positions. The device is adaptable for different instruments and environments.

Its camera records musicians, giving immediate feedback when they fall into a predefined bad habit. This comes in the form of visuals – shown on the Musician's Mirror app – or noise.

"This system allows for monitoring of body movements and positions that are instrument-specific," said Carabott, who studied a joint masters in Global Innovation Design at the Royal College of Art and Imperial College London.

"For example, you could watch for a pianist hunching their shoulders, or if a guitarist tends to lift the fretting arm elbow too high."

The device's response can be adjusted depending on the musical instrument, creating white noise for acoustic or distorting the sound of electric instruments.

Carabott chose audio feedback as musicians are already fine-tuned to pay attention to sound, and disrupting their performance was an incentive for them to instantly correct posture.

The Musician's Mirror can also create a heat map for each session, to show performers what their typical posture is. This can be shown as a single image or sequence, to help musicians identify when they're likely to slip into bad habits – which can also cause pain and injury.

During his research the designer uncovered a recent survey that reported 80 per cent of music academy students suffer from arm, neck or shoulder problems as a result of playing.

Carabott – who is currently working on another project at Microsoft Research – designed the device to be as unobtrusive as possible, so it can be easily clipped onto music stands and stored in cases.

"This project was intentionally anti-wearable," he told Dezeen. "Wearable posture-tracking hardware interferes with the delicate balances of the musician's body."

Carabott tested a prototype of the device at the Royal College of Music, working with teachers and students to incorporate the Musician's Mirror into their practice sessions.

Although aimed at musicians, the designer says the device could also be used in other situations that require good posture – such as yoga, sport or desk work.

Carabott is currently experimenting with ways of incorporating Musician's Mirror into a smartphone or tablet, making it more widely available to students and teachers.

Other devices that help users correct posture include Wearable X's vibrating leggings that let the wearer know when their yoga pose is imperfect and Jeffrey Heiligers' clothes tailored to prevent slouching. 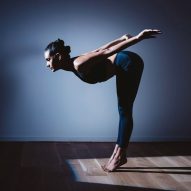