US firm Carney Logan Burke Architects has used reclaimed wood to build this gambrel-roofed dwelling, which sits on a remote site and looks toward a mountain range in the American West.

The Barn is located in Wilson, a tiny town in western Wyoming. It is situated on a 15-acre (six-hectare) property with expansive views of the Teton Range, which is part of the Rocky Mountains.

The structure contains a guest suite and a fitness room, along with a garage/workshop that is used by the client to restore and house vintage cars, motorcycles and bicycles.

The main house on the property – built two decades ago – was also designed by Carney Logan Burke Architects, which is well known for its modern-style dwellings in rugged settings.

"The owners of this building had commissioned the architect to do their original house 23 years ago, and returned to them with the charge of designing a new stand-alone structure on the property," said the studio, based in Jackson, Wyoming.

The Barn was carefully situated off the northeast corner of the existing house, in a way that preserves views for both structures.

The shape of the building was decided upon by the owner. It has a gambrel roof, defined by sides that have a shallower slope above a steeper one. "The clients had been researching precedents for the new structure and had decided that the 2,400-square-foot (223-square-metre) building should take the form of a classic gambrel-roof barn, so that was the starting point for the design," the studio said.

The structure comprises timber and steel trusses that are spaced four feet (1.2 metres) apart and run the length of the building. Reclaimed hemlock from a sawmill facility in Montana was used to fabricate the trusses.

In keeping with the rural vernacular, the architects clad the dwelling in old barnwood, restricting the colours to grey and brown. "Typically the grey barnwood is from corral fencing and the brown barnwood is from reclaimed rafters," the studio said.

To add an "unexpected element" to the design, the team installed a curtain wall on the north side of the building, where the fitness room is located. The glazing enables views of the majestic mountains.

On the other elevations, dormer windows offer framed views of the landscape. A little cupola rises above the roof, acting as a skylight and adding visual interest.

Inside, the lower level encompasses the entrance and workshop/garage, along with a powder room and storage area. A black-and-white checkered floor lends a retro aesthetic.

The upper floor, which features a vaulted ceiling, contains the guest suite, a small kitchen and the workout area. Rooms are defined by a neutral colour palette, contemporary decor and wooden walls and flooring.

"The interiors reflect a contemporary aesthetic that complements the barn’s functional, clean lines," the studio said.

The two levels are connected by a wooden stair with a cable railing. Its openness is meant to draw light down to the main floor and "to inversely to draw guests up to the drama above".

Carney Logan Burke Architects has worked extensively in its home state, with projects including a Wyoming retreat that was built around a huge boulder and a home-office extension with walls made of rammed earth. 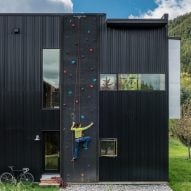