Six porthole windows provide the focal point for the Cirqua Apartments, which are made up from staggered grey brick boxes that break up the bulk of the development.

The windows span almost the full height of six cubes that project towards the street, flooding the interior living spaces with natural light.

"The building facades are highly articulated to reduce the overall building's mass and present a smaller scale," explained the architects. "The design draws on the materiality and expression of local, historical housing types that are reinterpreted in a contemporary manner."

"The design has been carried out to provide a strong sense of address for tenants whilst maintaining a street rhythm and scale that stitches the project into its context," they added.

"Generous glazing maximises connections to the surrounding garden, with significant landscaping integrated into the design, capturing the 'garden city' essence of Ivanhoe."

The interiors are neutrally finished, with ribbed timber and grey carpeting lining the communal spaces, and circular light fittings echoing the facade.

Inside the apartments, white walls, marble splashbacks and wooden floors give the open-plan living spaces an uncluttered appearance, and the bathrooms are finished with monochrome tiling.

The apartments, which are located in a still largely undeveloped suburb, are designed to appeal to owner-occupiers rather than buy-to-let investors.

"The Cirqua project represents a shift in the multi-residential market that has been evolving over the past two-to-four years," explained the architects. "Prospective owners are increasingly buying into the apartment market over detached housing as a matter of choice rather than necessity."

"Where previously apartments were largely aimed at the investment market, or those who could not afford to buy a house, the majority of Cirqua's tenants comprise owner-occupiers," they continued.

Also located in the neighbourhood is a timber-framed extension by Austin Maynard Architects, while in the adjacent suburb of Kew, the same studio used scalloped, brick-shaped and diamond shingles to cover a multigenerational residence. 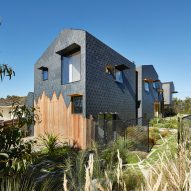 Photography of the exterior is by Peter Bennetts, of the interior, Shannon McGrath.