Dezeen promotion: a mix of established and emerging designers have contributed one-off artworks to be auctioned anonymously for Joy of Living, an initiative raising money for Maggie's Centres.

The Joy of Living exhibition is organised by design writer Max Fraser, who first ran the event in 2011, and new collaborator Aynsley Munsie.

For each iteration, Fraser invites designers to contribute an artwork around a theme or using particular materials – and this year Jasper Morrison, John Pawson, Barber and Osgerby, Tom Dixon, Amanda Levete, Faye Toogood, Bethan Laura Wood, Rolf Sachs and Lee Broom are among those who answered the call.

For this, the third instalment, the brief was to use three pieces of coloured paper from GF Smith's Colorplan range. The colours were randomly selected from a set of 12, and the designers could manipulate them in any manner they wanted.

The results range from sketches and colourful collages to a sculpture of a desk lamp and some shredded-paper homeware.

It's not known who made which work, meaning buyers are enticed to bid by the qualities of the art – and the chance they might be taking home a piece by a big name.

Although the creator of each piece will only be revealed once it has sold, the works are signed by their makers.

All proceeds from the sale of the artworks will go to Maggie's, a charity that offers free practical and emotional support for people living with cancer. It is known for its network of care centres across the UK, which are designed for optimal calm by leading architects including Richard Rogers and Norman Foster.

Fraser started working with Maggie's and was inspired to launch Joy of Living after supporting his mother through a six-year battle with cancer.

"Maggie's recognises that building an atmosphere of calm and celebrating a good quality of life are immensely beneficial to patients, and I know that my mother would have benefited so positively from its services," he said.

"Charity founder Maggie Keswick Jencks once said, 'Above all what matters is not to lose the joy of living in the fear of dying,' and this statement has inspired the design challenge and Joy of Living project."

The Joy of Living aims to raise more than £80,000 for Maggie's. The artworks will be exhibited on the ground floor of One Poultry in London from 5 to 10 September 2017, and open to the public from 10am to 7pm.

The artworks are also available to view online on Maggie's website, where interested buyers can place bids from 5 September. Donations towards the project can be made via Virgin Money.

Dezeen is a media supporter of the event. The confirmed list of participating designers is below, with more expected to submit works before the auction goes live. 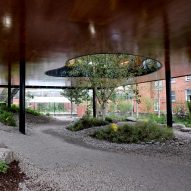