The latest contender in the fight to create the world's blackest black is a paint originally developed for NASA and now made available to the public.

It was originally created as part of the company's ongoing research with NASA, which needed ways of reducing glare on space equipment.

Singularity Black is similar to the controversial Vantablack – a paint also composed of microscopic vertical tubes that trap light instead of bouncing it off, allowing it to absorb 99.6 per cent of light.

The paint – described as the blackest shade of black ever created – attracted attention after its creator, British company NanoSystems, sold the exclusive rights for its use to artist Anish Kapoor.

Unlike Vantablack, Singularity Black has been made available to the general public, with NanoLab also offering a coating service for anyone that sends in pieces to their lab.

The company is prepared to share the process with artists interested in using Singularity Black in their own studios, and gives individual advice on projects. Tins of the paint are available in various sizes, including a smaller artist's sample that costs $30 (£23).

Singularity Black is said to have the lowest visible reflectance of any paint available to the public; however, it is technically somewhat less black than Vantablack, which has even lower reflectance.

NanoLab has partnered with Boston artist Jason Chase to show the paint's possibilities. His piece Black Iron Ursa shows a cast-iron bear, coated in Singularity Black and sitting atop a rainbow-coloured base.

It will be shown at Boston's Laconia Gallery on 24 August, and scientists from NanoLab will also be on hand to answer questions about the paint.

"It is important to create access so artists can use it," said Chase. "Artists are always the ones who take new materials and push them to new limits. Singularity Black is the perfect new medium to foster such experimentation and development across a global community."

"This super black paint and its possibilities have been stunted by not being available to experiment with. Starting with my work, those day are over."

According to Chase – who plans to make several pieces using Singularity Black – the paint itself is somewhat fragile, and also requires several coats and baking at high temperatures in order to bind the paint to its surface. This makes its potential usage is limited.

Semple has also designed a colour-changing paint that Kapoor was prohibited from using, and an "open-source" cherry-scented version of Vantablack that could be purchased by anyone but the artist. 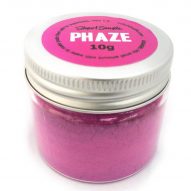