Spanish architects Adrian Elizalde and Clara Ocaña broke down walls to create an open-plan layout for this apartment in Barcelona's Eixample neighbourhood, and lined its new light-filled rooms in warm-toned wood.

The duo reorganised the 65-square-metre apartment on Comte Borrell street to improve access to natural light from a row of floor-to-ceiling windows at one end.

The resulting linear flow of open-plan spaces ensures daylight can pass through the lounge to the kitchen and beyond to the bedroom at the rear of the apartment.

New openings punched in the load-bearing walls that define the three new spaces – a living room, kitchen and dining space, and a bedroom and bathroom – are highlighted by the inclusion of I-beams, which are left exposed.

"Originally, the apartment presented a decayed and dark image due to the excessive subdivided rooms," explained Elizalde and Ocaña, who run Barcelona studio EO Arquitectura.

"The patio is very narrow and it scarcely receives light. Except for the two rooms next to the main facade, the apartment was barely illuminated by natural light," they continued. "The main objective has been to achieve the maximum use of natural light in the apartment. We simplified the distribution to obtain large and opened spaces that multiplied light."

Interventions and existing features alike are painted white, with the I-beams and original ceiling mouldings given the same treatment.

The city's apartments are famous for their elaborately patterned tiles, but Elizalde and Ocaña paired the bright white finish with wooden cabinetry and floorboards instead. Just a small patch of geometric-patterned tiles pave the floors of the kitchen and bathroom.

"Both traditional and technical materials are painted in white, which improved natural light and gave the apartment an homogeneous and timeless atmosphere," said the architects.

Elizalde overhauled another apartment in Eixample as a student, using sliding doors to subdivide the spaces. The area adjacent to the city's old town has seen a considerable amount of regeneration in recent years.

Earlier in 2017, Bonba Studio transformed an office in the district to create a two-bedroom flat featuring traditional vaulted ceilings and multi-hued surfaces, while back in 2016 Nook Architects used strategically placed mirrors to create the illusion of greater space within another of the neighbourhood's apartments, which are traditionally have compact layouts. 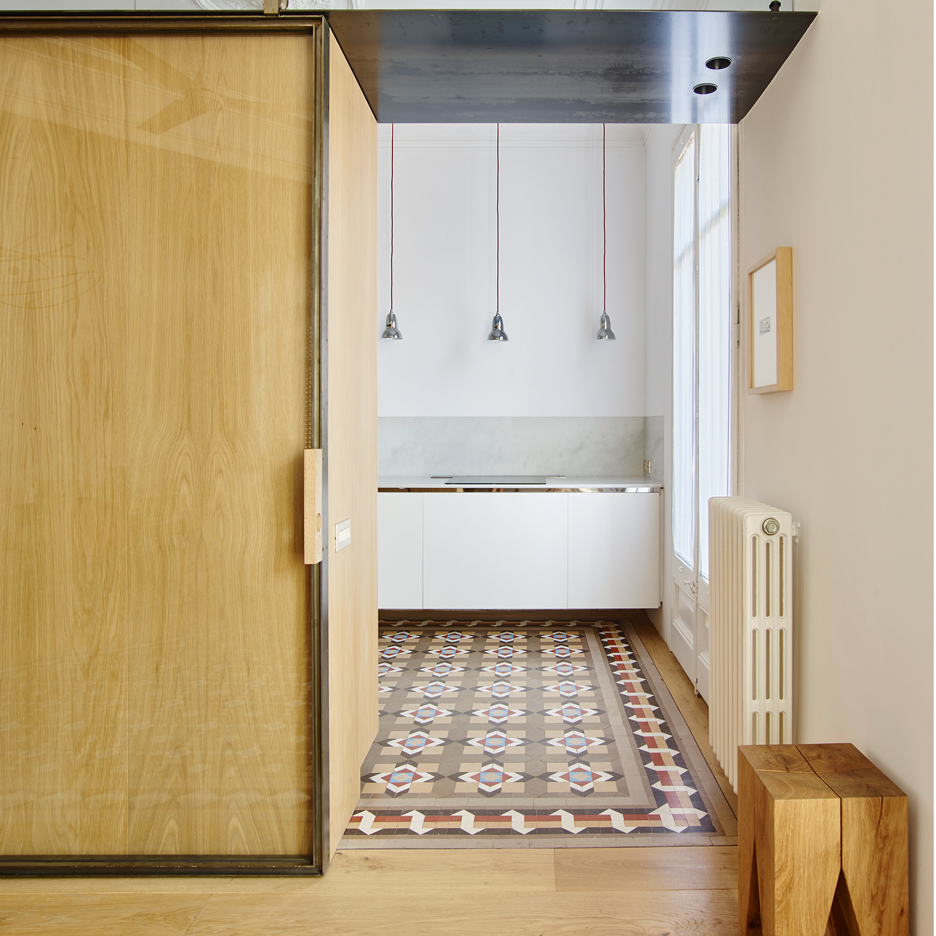 Photography is by Adrià Goula.