The voice assistant from Google's Home smart speaker has been unleashed in third-party devices, with the launch of a new product from Panasonic that promises better sound quality.

Panasonic revealed the GA10 speaker at a press conference yesterday ahead of the opening of the IFA consumer electronics show in Berlin.

The speaker is the first from a major electronics brand to incorporate Google Assistant, which responds to voice commands prefaced with "OK Google" to play music, answer questions or control other connected-home devices.

Distinguishing the GA10 from Google's own voice-controlled Home device is a focus on audio quality. The speaker incorporates an eight-centimetre woofer with a dual-voice coil that Panasonic says produces a "much more robust and impressive bass sound".

Above it are two 20-millimetre tweeters, which point outwards at a 45-degree angle to create "a wide, smooth and expansive sound effect".

Panasonic's device also has a vastly different look to Google Home, which Wired previously likened to an air freshener. The GA10 has the appearance of a more traditional speaker, with a minimal, boxy design. It boasts an aluminium case and fabric mesh overlay, and comes in either black or white.

Google made its assistant openly available to third parties when it released a software development kit earlier this year, and the IFA (Internationale Funkausstellung) will see the launch of at least two other speakers sporting the technology.

One is the Zolo Mojo by Anker, and the other is the TicHome Mini by Mobvoi, both mentioned by Google in a blog post yesterday.

Google launched its Home speaker in October last year as a competitor to the Amazon Echo, which uses its Alexa voice service.

As well as playing music, the countertop devices can act as a central command centre for homes connected to many digital gadgets and systems.

Amazon has also made its voice-control technology available to third parties, which means speakers like Lenovo's Smart Assistant are enabled by Alexa.

Apple is also making its own version of the smart speaker, called HomePod, which runs using Siri. The speaker is expected to hit stores in December.

IFA is on in Berlin from 1 to 6 September. The event sees new product launches from major electronics companies like Panasonic competitors Samsung and Sony, as well as presentations from start-ups and smaller companies.

Among the products showing this year is the new Ionic smartwatch by Fitbit and a connected scent diffuser by start-up Pium. 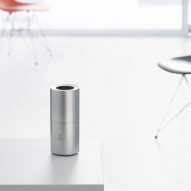