A new movie set in the unlikely modernist mecca of Columbus, Indiana, sheds light on the city's architectural gems and uses an interpersonal tale to question their importance today.

Released last month, the film simply titled Columbus follows the story of an architecture fanatic's evolving relationship with an architectural historian's son, as they both remain tied the city by their parents.

Indiana probably does not top many people's lists of modernism meccas. But when South Korean, Nashville-based filmmaker Kogonada visited the midwestern state three years ago, he found inspiration in the midcentury architecture of its 20th largest town, and chose it as the setting for his critically acclaimed directorial debut.

"I knew I wanted to write a script about the burden of absence that children carry in regard to their parents," Kogonada told Dezeen. "When is it okay to move forward with our own lives and leave our parents? And when will our parents leave us for good? But it wasn't until I visited Columbus that the story and characters took shape."

A city of about 45,000, Columbus is 180 miles from Chicago and worlds away from New York or Los Angeles. Nevertheless, a remarkable surge of corporate philanthropy led to its outsize role in modernist architecture.

In the 1950s, as the town's population increased, the Cummins Engine Foundation began offering to pay the architect fee for new public buildings – but only if the architect was selected from an impeccable list compiled by the foundation. While money came from Cummins' production of diesel engines, the vision came from the foundation's CEO, J Irwin Miller, who is singlehandedly responsible for his hometown's architectural renaissance.

Like most visitors, Kogonada was taken by the city's architecture. In just a few blocks are major works by the likes of IM Pei, César Pelli, Kevin Roche, and Skidmore, Owings & Merrill. He and cinematographer Elisha Christian decided to shoot Columbus on location, treating the dozens of modernist masterpieces more like actors than scenery.

"During preproduction, we visited all the locations and took photographs, so we had an idea of how were going to approach each scene and space," Kogonada said. "The buildings were never treated as just background. They were always integral to the moment we were trying to capture."

Anyone who has recently found themselves travelling down a Vimeo rabbit hole will have likely come across Kogonada's video essays, so his pursuit of the perfect mise en scène should come as no surprise. His Vimeo supercuts, all self-produced, touch on the subtle styles of Bresson, Kubrick, Malick, and, most tellingly, Yasujirō Ozu. Kogonada, a pseudonym, is a reference to Kōgo Nada, co-screenwriter of several Ozu films. After his videos floated to the top of filmmaking forums, Kogonada found work at Criterion Collection and Sight & Sound, making his jump to feature films all but inevitable.

As he batted around ideas for his first screenplay, the power and pressure of a generational bond became a jumping-off point. In Columbus, he saw evidence of that generational bond between two of the town's greatest architects: Eliel and Eero Saarinen, father and son, both of whom designed masterpieces for the city. The parent-child dynamic then seeped into the story in more ways than one.

After his father, an architecture historian, collapses behind one of the Saarinen churches, Jin (played by John Cho) arrives in Columbus to do what little he can despite their fractured relationship. As his father slowly recovers, Jin befriends a blossoming architecture aficionado – "an architecture nerd", he says – named Casey (Haley Lu Richardson), who has somewhat reluctantly stayed in town to be with her mother, a recovering addict.

Despite overtures from architect Deborah Berke to join her at Yale, Casey holds fast in Columbus, surrounded by architectural wonders but also a provincial population that she says fails to appreciate the genius around them in everyday life.

Most of Columbus' modernist gems were conceived, at least originally, as normal parts of small-town life: a library by IM Pei, a bank by Eero Saarinen, a school by Harry Weese, a firehouse by Robert Venturi, etc. The pinnacle of domesticity is the Miller House, designed by Eero Saarinen, with interiors by Alexander Girard. Built in 1953, the house was home to J Irwin Miller and his wife, Xenia. Spoiler: It happens to be number one on Casey's list of favourite buildings.

Yet Jin isn't sure about the modernist power in which his father and Casey so strongly believe. As he and Casey tour an array of beautiful buildings, he still can't quite comprehend why his father obsessed over "modernism with a soul".

Decades later, the question is if the buildings still succeed in their attempts to humanise abstract concepts with architecture. Perhaps they have become almost fetishised, removed from their initial intent. After all, James Stewart Polshek's Quinco Mental Health Center – a bridge-like building that served as a literal metaphor for architecture's power to heal – is now, as Casey says, "rundown", and the Miller House has been turned into a museum that's only accessible via guided tour.

Now that the city's patron and promoter J Irwin Miller is gone and the modernist pursuit continues to evolve, even the legacy of the younger Saarinen has been compromised. His design for Irwin Union Bank –what Saarinen called a "bank without any pompousness, absolutely no intention to impress" – is now a conference centre set to be reimagined with twisting new additions. The new work is part of Exhibit Columbus, which opened this month as a citywide celebration of architecture and community.

But Kogonada said the modernists' pursuit – and success then and now – isn't black and white. "The town of Columbus almost exists as a case study of this pursuit, which is what makes it such a compelling town. And the answer is complicated and ongoing. I don't think it's either/or."

Still, even without Miller steering the ship, Columbus continues to offer something special to forward-thinking architects. Benjamin Aranda, whose firm Aranda\Lasch also has work featured in Exhibit Columbus, became familiar with "the Columbus way" while working on a new public space called Another Circle, which uses recycled limestone salvaged from a mill in Bloomington, Indiana.

"They're remarkably open and receptive to ideas," Aranda said, "and when they get behind something, it really gets done. There's something in the air there that makes them proud of their work and community. As a hardened New Yorker, I can say it's not blind enthusiasm but informed and inspiring."

As for "modernism with a soul", Aranda thinks Jin's father may have missed the mark. "To me, that’s a redundant phrase," he said. "The modernist legacy of Columbus shows us that, at the pinnacle of modernism, their edifices carried deep meaning without having to shout it out. Poise and silence are part of that legacy."

Columbus was released 4 August 2017 and is currently showing at select theatres across the US. Photography is by Elisha Christian, courtesy of Superlative Films/Depth of Field. 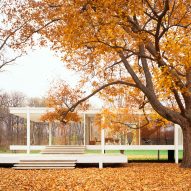