Architect Sam Jacob is teaming up with MINI to create an urban retreat that offers visitors a space to research and relax during this year's London Design Festival.

Jacob's Urban Cabin, which he designed alongside the MINI Living team, will be installed in the courtyard of Oxo Tower Wharf – and will join the programme of London Design Festival's Landmark Projects.

His idea stems from wanting to show the differences between the way London was in the past, and how it is at the present moment.

"I've always been interested in combinations, juxtapositions and fusions; in how projects can draw on different references and forge alternative possibilities," said Jacob.

"Often this means bringing apparent opposites together to create unexpected alliances and design languages. The aim is to open up the possibilities of design while also making reference to the world around us."

Through his installation, Jacob aims to provide Londoners with a research space equipped with facilities inspired by the amenities that they might not have access to.

A shared kitchen is based on the city's abundance of food markets, while a micro-library addresses the decreasing number of public libraries that have faced closure following funding cuts.

The exterior of the building is based on the rich combination of facades seen across the city, while the interior is designed as a nod to "British eccentricity". Also on the outside, mirrored surfaces will reflect the cabin's surroundings. 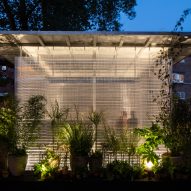 "The mirrored surface of Urban Cabin is playing with the reflections of its surrounding, while the interior is an interactive space designed to understand and evaluate the personal needs of the London urbanite," said Corinna Natter, an experience designer at MINI Living.

London Design Festival takes place this year from 16 to 24 September. It's the second time that MINI Living – a research project by the automotive company that explores the future of cities – has taken part in the festival.

The project began with an installation during last year's Milan design week, and at London Design Festival 2016 they worked with architect Asif Khan to install "forests" in see-through boxes across east London, designed for those who don't have access to parks or gardens. 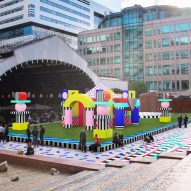 Sam Jacob is principal of Sam Jacob Studio, and a professor of architecture at University of Illinois at Chicago. The London-based architect and Dezeen columnist was formerly a director of the now-defunct FAT alongside Sean Griffiths and Charles Holland.

The practice disbanded in 2013 after 23 years, but during their time together, they designed a housing block in England where an assortment of building typologies appear to be stacked on top of one another and an exhibition dedicated to architectural copying for the Venice Architecture Biennale 2012.