Dezeen has teamed up with British furniture brand OMK 1965 to offer two readers the chance to win a classic Omkstak chair in a colour of their choice.

This competition is now closed. Congratulations to the winners, which are Amy Housden from Brackley, UK and Bianca Jasper from London, UK.

Originally developed in 1972 by designer and brand founder Rodney Kinsman, the Omkstak is one of the most enduring chair designs of the 20th century, and is included in the collections of the V&A, London's Design Museum and the Philadelphia Museum of Art.

The lightweight, stackable chair features a perforated steel backrest and seat, along with a continuous tubular steel frame.

Before now, the chair was only available to buy in white, grey or black. But to mark the chair's 45th anniversary, OMK has released it in five new colours: Turquoise blue, Capri blue, Salmon pink, Dahlia yellow and Traffic red.

According to OMK, this bold colour palette was informed by the natural landscape of Lake Garda, Italy, where the chairs have been crafted since 1972. All five of these colours will be presented at the London Design Festival later this month, as part of designjunction.

The brand will also showcase refreshed versions of other classic designs at LDF, including the sculptural Tokyo stool, which was originally produced in 1985 for London's Groucho Club, and the spherical Orbit mirror designed in 1981.

OMK was founded in 1965 by Rodney Kinsman. It started creating furniture for Terrance Conran's Habitat stores throughout the 60s and 70s before going on to produce pieces for the public sector.

The Omkstak chair is also available to buy via the OMK 1965 website. 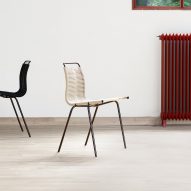