Architecture firm Grimshaw has revealed plans for an office tower overlooking Sydney harbour, which will comprise three district sections and a curving roofline that references the vaulted shells of the nearby Opera House.

The tower, which will take the name of the lot, will also be bounded by Alfred, Pitt and Daley streets, an area just inland from the Circular Quay harbour.

Located near the Barangaroo development, the regeneration of the site is part of a major overhaul of the city's waterfront.

The building will comprise three interlinking sections, lending it the appearance of not one, but three towers.

The two tallest elements – one completely glazed and the other opaque blockwork – will span 26 storeys and be joined by chunky expressed slabs. The third, a lower rise block, will feature double-height floors framed by arching fins of concrete. Terraces cantilevered from its facade will face onto George Street.

Grimshaw's design is intended to appeal to the "millennial worker" that the newly developing district aims to attract – innovators in the creative, technology and finance sectors.

"Sydney is uniquely placed to attract and retain 21st-century talent, we see the opportunity to create a leading-edge workplace that inspires the day-to-day working lives of its occupants, enlivens the public realm and adds vibrancy to city life," said Grimshaw managing partner Andrew Cortese.

Taller towers flanking the site will block many of the views towards the harbour, but a room set right at the top of the glazed portion of the scheme will be afforded a glimpse of the Opera House. The curving ceiling of this room is designed to reference the vaulted shells of Jørn Utzon's iconic 20th-century design.

A double-height lobby and shopping area will be set in the base of the tower adjoining George Street, while plans for the basement may include a public art gallery, and restaurants and bars that aim to offer a "thriving night-time economy".

Construction on the scheme, designed by Sydney-based property developer Poly Australia, is due to begin in early 2019 and complete in 2022.

The district on the edge of the central business district is also set to become home to a new metro station by Foster + Partners and a pair of residential high-rises by Renzo Piano, while Rogers Stirk Harbour + Partners has just completed a trio of skyscrapers that are the centrepiece for the development. 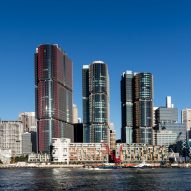