Rising above New York's Museum of Modern Art (MoMA) at 53 West 53rd Street, the 53W53 residential tower is due to reach 1,050 feet tall once complete.

Pritzker Prize-winning architect Nouvel's design has a tapered shape and a criss-crossing structural frame, which can be seen in the construction photos released this week.

"53W53's sculptural form, progressive yet reminiscent of classic Manhattan skyscrapers, incorporates an innovative exposed structural system, which Nouvel refers to as the diagrid," said a statement released with the images.

At its base, the building will incorporate three levels of gallery spaces for MoMA, as part of the museum's expansion overseen by New York firm Diller Scofidio + Renfro. Future residents will receive MoMA membership as part of their amenities package.

Above, 145 high-end residences will range from one- to five-bedroom condominiums, including full-floor apartments and duplex penthouses.

"Because of the building's tapering design and the diagrid, the layout of each condominium residence is unique," said the statement.

Interiors for 53W53 are designed by New York-based interior architect Thierry Despont, and shown in a set of renderings that also includes updated views of the building's exterior.

A 17,000-square-foot (1,580-square-metre) Wellness Center will feature a 65-foot (20-metre) swimming pool, a fitness centre, sauna and steam rooms, a golf simulator and a squash court.

Other communal facilities for residents include a library, a theatre, a children's playroom, private storage and temperature-controlled wine vaults.

On the 46th and 47th floors, a double-height lounge will provide views across the city and a private dining room will overlook Central Park.

The skyscraper is one of several residential towers rising or recently completed in Midtown Manhattan that are categorised as supertall – measuring between 980 and 2,000 feet (300 and 600 metres). Rafael Viñoly's 432 Park Avenue, Christian de Portzamparc's One57 and Adrian Smith + Gordon Gill Architecture's Central Park Tower are among the others.

Nouvel won the prestigious Pritzker Prize in 2008. His best-known buildings in the Institut du Monde Arabe and Philharmonie de Paris in the French capital, and the Torre Agbar in Barcelona.

Work is almost complete on his Louvre Abu Dhabi museum, which is topped with a giant metal dome. 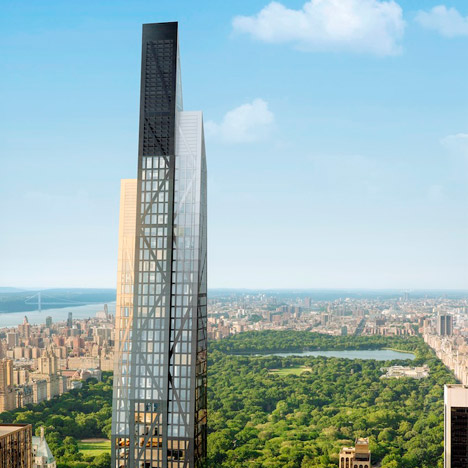