Canadian company The Work of Mind has crowdfunded a compact measuring tool that professionals like architects, designers, sewers and carpenters can use on the go.

Rollbe is a miniature version of a measuring wheel device, sometimes called a surveyor's wheel or trundle wheel. It has a numbered edge that users roll along the surface they wish to measure.

Made to be super-compact and portable, the smallest version of the Rollbe is just four inches in circumference and comes with a leather pouch that can be carried as a key ring.

The device's coin-like proportions are actually inspired by a former, unsuccessful crowdfunding campaign by The Work of Mind, which aimed to produce minted coins that reminded users of their own bad habits.

"I really like to work on the concept of compact accessories," Rollbe founder Karlis Krisjans told Dezeen. "The idea bumped into my head when one day I was just sitting at my work desk with a coin in my hands and questioning, what else could you do with this object?"

Larger editions of the Rollbe that are eight inches, 10 centimetres or 20 centimetres wide will also be available to buy.

Due to its circular shape, the Rollbe is able to move against both curved and straight surfaces. To work out the total length of an object, users must count the number of rotations the device makes. While before this had to be done manually, Work of Mind has recently added a feature where a clicking sound is now made on every full turn.

Users then multiply this by their Rollbe's circumference to get the length they've measured.

Krisjans chose to use stainless steel and brass for the device's main components, while the numbers and markings were laser engraved to ensure they wouldn't fade over time. 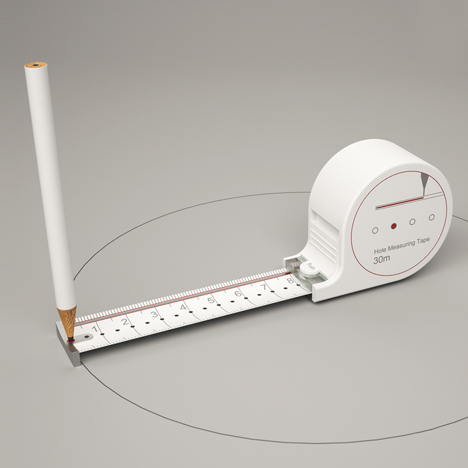