Italian studio Pedevilla Architects has completed an extension to a traditional Alpine hotel, comprising a monolithic blackened-timber volume with windows that jut from the walls and roof to optimise mountain views.

Pedevilla Architects developed the six-storey extension for the Bühelwirt hotel, which is situated in the Ahrntal commune of northern Italy, just three kilometres from the Klausberg ski area.

The aim of the addition was to introduce 20 new rooms, along with a spa and expansion of the restaurant, to the existing chalet-style hotel dating from 1910.

A steeply sloping plot to the east of the main hotel was chosen as the site for the extension, which steps down the hillside to ensure that the existing building is not compromised with regards to views and sunlight access.

The new structure features an asymmetric saddle roof that echoes the pitched roofs of the region's traditional architecture.

A narrow bridge connects the existing hotel with this sloping surface, which is carefully angled to prevent it impacting the rooms in the original building.

The extension's wedge-shaped plan reduces the northern elevation and maximises the size of its southern and eastern facades to make the most of its exposure to sunlight, which is crucial at this elevation of 1,200 metres.

The entire structure is clad in blackened larch, with the geometric planes interrupted only by angled protrusions incorporating windows and balconies made from the same material.

"The design of the facade in black larch wood was chosen to create a recognisable value and also to raise the building out of the surroundings as something special to become a meaningful shelter," architects Alexander and Armin Pedevilla told Dezeen.

"The interaction between the natural materials gives the hotel warmth and an obvious elegance," the brothers added. "Characteristic elements of the local building typology were translated and interpreted."

The studio used a similar material palette for a property designed for Armin's family that was inspired by traditional farmhouses. The firm's other projects in the region include a fire station made from red-pigmented concrete and an asymmetric house with a homogenous chalky-white exterior.

Inside the hotel, surfaces surrounding the projecting window areas are lined with untreated larch that also forms built-in furniture including bench seating.

The wood extends across the floors and some of the walls in the bedrooms, as well as creating a homogenous feel in some of the circulation spaces.

Other surfaces in the rooms are rendered with a clay plaster made using ingredients from a nearby copper mine, which also provided the metal used for the bespoke light fittings. Curtains made by a local manufacturer add a textural element to the warm palette.

"Because of the carefully chosen regionally produced materials which complement each other we created a homely and calming atmosphere," the studio suggested. 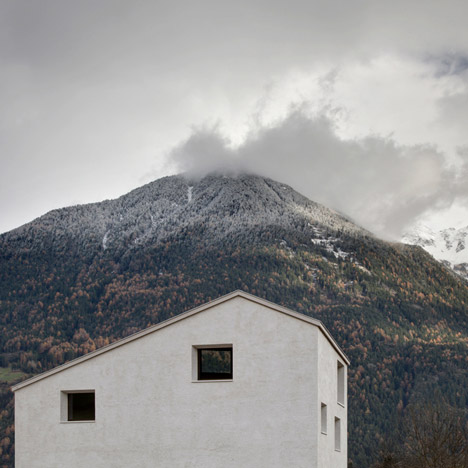