To create the covers, Paul McNeil and Hamish Muir of MuirMcNeil used HP Mosaic – a piece of software developed for the HP Indigo digital printer that enables millions of unique designs to be created from a limited number of original designs, referred to as "seed" image files.

Companies such as Coca-Cola have previously used the technology on a commercial scale to generate millions of unique label designs for its various different campaigns.

The London studio produced 10 master seed files that took the form of a series of vector drawings, in which the letters of the word "eye" were repeated in fixed increments and in three layers. Each typeset was created in a different font of the duo's coordinated TwoPoint and TwoPlus typefaces.

The typefaces followed consistent progressions of all 76 weights and styles in each of the three layers, which were shifted laterally in distances precisely proportionate to the letter size and spacing.

Using the Mosaic software, MuirMcNeil set systematic rules to scale, position, crop and modify the colour palette of sections of each seed file. Following these rules, the software was able to generate 8,000 unique numbered front and back covers for the UK magazine's 94th issue.

It follows Nutella's recent Unica project, which saw the hazelnut spread's manufacturer Ferrero team with advertising agency Ogilvy & Mather Italia to create seven million unique label designs. Designed using an algorithm that pulled from a database of dozens of patterns and colours, each jar was stamped with its own unique code so it could be authenticated by collectors.

Computers are increasingly playing a role in the design of graphics, products and buildings. In June this year it was announced that researchers from Switzerland's ETH Zurich university will use robots and 3D printers to design and build a pioneering three-storey house at a local research and innovation campus.

Similarly, Dezeen reported in May that new 3D-printing software developed by a team from the Bartlett School of Architecture in London has enabled a robot to design and build a chair from a continuous line of plastic. 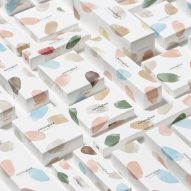