An algorithm has usurped the traditional role of a designer to generate millions of unique packaging designs for Nutella.

The algorithm pulled from a database of dozens of patterns and colours to create seven million different versions of Nutella's graphic identity, which have been splashed across the front of jars in Italy.

The agency describes each Nutella Unica jar as being "like a piece of art", stamped with its own unique code so it can be authenticated by collectors.

The seven million jars were sold through Italian supermarkets, where Ogilvy & Mather says they sold out in one month. The agency also created an online and television advertising campaign around the packaging design.

"We think Nutella can be as special and expressive as every single one of its customers," said Ogilvy & Mather.

"With this objective, Nutella Unica was born – the first limited-edition made by seven million different jars. Dozens of patterns, thousands of colour combinations, one special algorithm."

The hazelnut spread is already known for its personalised packaging, allowing consumers to create Nutella labels printed with words or names of their choice.

Both that campaign and Nutella Unica rely on the brand's highly recognisable lettering, which has meant other elements of the packaging design can be altered or stripped away.

This was made light of by a conceptual redesign in 2010 by Antrepo, which went viral by showing how minimal Nutella's labelling could go and still be easy to distinguish.

Robots are increasingly being called on to contribute to graphic design. The Vitra Design Museum recently had an algorithm do the layout for a book accompanying its Hello, Robot exhibition. 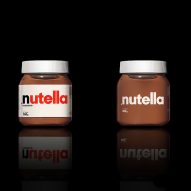 12 minimalist packaging designs that do a lot with a little