The design takes inspiration from the colours and textures of artefacts traced back to the Quimbaya civilisation, found in what is now Colombia and dated between the 4th and 7th century AD.

Many of these household items have smooth, bulbous edges and are finished in a single colour.

Del Valle and Tu Taller Design's pestle and mortar – heavy devices used to grind and crush spices, seeds and other substances – rest perfectly inside one another.

"We want to make an object of interaction, elegance and functionality," said the designer. "Our product is designed for people who like to be creative in the kitchen, in a meeting or at a special moment."

When fitted together with the bowl-like pestle turned upside down, they resemble a poporo, one of the most recognisable — and minimally designed — pre-Columbian products.

The relic has a receptacle and a lid that join atop each other seamlessly, and was used for storing lime and chewable coca leaves.

Available in black or white, the mortar and pestle reflect the smooth surfaces of a poporo, but are made of resin instead of the traditional gold and copper alloy.

"We do not seek to be literal in our objects, nor to replicate what has already been done," said Del Valle. "Instead we focus on abstracting and reinterpreting objects for everyday use based on values found in that culture."

The designer hopes the device will be "a piece of Colombian design that evokes with the form and concept our country".

Kitchenware with minimal forms has also been created by designer Mark Braun, whose tabletop pestle and mortar is based on traditional millstones, whiel studio De Allegri and Fogale produced a pepper grinder from two contrasting sculptural stones. 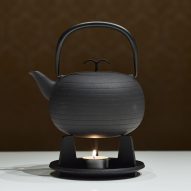