South Korean company Dot has developed a smartwatch that only displays information in braille, and is calling it a world first.

The minimalist design features a large circular face with a moving keyboard that relays braille text in real time.

While its main function is to tell the time and date, the watch can be connected to a smartphone application called the Dot Watch App, to receive information such as road navigation, weather notifications, calls and text messages, as well as social media alerts.

Made from silver aluminium, the watch utilises four electro-magnetic actuators that seamlessly relay information through textural dots. These automatically adopt the formations of braille numbers and symbols.

The watch can be paired with straps in different colours and materials for personalisation.

Dot claims that, while other braille displays read one line at a time, the display on the Dot Watch is an active one. It is designed to "pass by the user's fingertips as if it were on a moving belt", said Alex Lee, Dot's sales and marketing director.

The technology is touch-sensitive, meaning that the second a user takes their finger off the final dot in a sentence, the braille formation changes to the next. The user is able to flip between messages by tapping the face of the watch or manually by using the side buttons and dial.

The company believes the Dot Watch is pushing forward innovations in braille technology, "while sending a message to the vision-impaired that there are people like us who want to make cool things for them".

"There are significant barriers to accessible information for the blind and vision-impaired both online and offline. We wanted to create something that would truly make an impact in the market of assistive innovations and inclusive design,"Lee told Dezeen.

"There just aren't that many products that exist that have inclusivity at its core for the visually impaired community. Through our research and countless conversations with members of these communities, it seems that their voices get drowned when trying to push for increased accessibility as a whole."

The streamlined design provides a mobile and comfortable solution to the otherwise inconvenient and awkward braille technology currently on the market.

South Korean design studio Cloudandco were behind the visual styling of the Dot Watch. It sought to create a product with a clean, minimal look that was non-intrusive and comfortable for the wearer. Dot have likened the face of the watch to the designs of Dieter Rams and Dietrich Lubs for Braun.

Currently the smart software supports English and Korean Braille only, but the company hopes to add braille alphabets for Japanese, Arabic, Spanish, French, German, Italian, Chines and Hindu in the near future.

Dot claims that the innovative electro-magnetic actuator system in the Dot Watch could be used in a variety of public services and infrastructure, such as transportation, elevators and bank ATMs.

The brand is also doing research into creating a tablet device using the same electro-dynamic cell system, to display long format texts, similar to devices like Kindles and iPads. 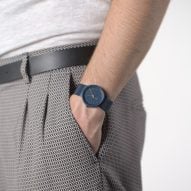 Braun and Dezeen team up to launch exclusive limited-edition watch