Aires Mateus has completed a new architecture facility at a university in western Belgium, featuring a huge gabled void in its facade and a dramatic double-helical staircase inside.

Manuel and Francisco Aires Mateus designed the new faculty building for the Université Catholique de Louvain's Tournai campus, which is located around 80 kilometres outside Brussels. The Lisbon-based duo won a competition to design the school back in 2014.

The off-white building stands between two red-brick industrial blocks, and an 18th-century convent formerly used as a hospital.

The positioning of the new building against the ground-floor windows in one of the brick facades informed a large cut out through its facade, which leaves a gap at one side so as not to block out natural light.

"The new building is positioned in order to bond together each of these structures and to define new external spaces," said the architects, who run the studio Aires Mateus.

"All the existing buildings are connected vertically and horizontally throughout the block."

The chamfered cut leads through to a courtyard at the rear and provides access to a pair of glazed entrances. One leads into a converted brick building, while the other runs into the new facility designed by Aires Mateus.

The former hospital building now accommodates administrative offices, while the pair of industrial buildings house classrooms and a library.

Inside, a house-shaped form sat within the lobby holds an auditorium at ground level. A pair of concrete staircases twist through an atrium in opposing directions to link the floors above.

The simple and monochrome detailing of the interior lends the spaces the appearance of an architectural model.

"Inside, public functions are sheltered, like the foyer and auditorium, operating not only as passage spaces and meeting places, but also as a part of a new identity," said the studio.

The auditorium is illuminated by strip lights that follow the gabled outline of the ceiling, while spotlights are set into the base of the stair treads.

The building stretches the length of the narrow site, reaching a street at the rear where irregularly shaped windows echoing the house-shaped cut out of the entrance are set flush with the facade.

Manuel and Francisco Aires Mateus have now designed a number of buildings featuring similar irregular cut outs punched through their facades, including a community centre in the Portuguese town of Grândola and a farmhouse in the country's Alentejo region. 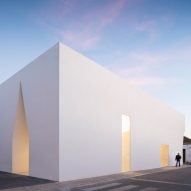