Caruso St John has teamed up with architectural photographer Hélène Binet and artist Thomas Demand for an exhibition made entirely from paper and cardboard at the Chicago Architecture Biennial.

A wooden trestle table supports five architectural models of Caruso St John projects as part of the exhibition titled Constructions and References. Among them is the Newport Street Gallery with its distinctive sawtooth roof that was designed for British artist Damien Hirst, for which the London studio won the 2016 Stirling Prize.

"We have been working with both Thomas and Hélène for around 20 years," studio co-founder Adam Caruso told Dezeen.

"The small models in the biennial show four of the collaboration we have done with Thomas, including the first one at the Fondation Cartier."

The biomedical laboratory building the studio is developing for the University of Basel is also represented by a a model with arch-shaped notches and gridded green sides that portray the pigmented glass facades the building will feature when it completes in 2022.

These two large-scale models stand alongside maquettes of three buildings the architects developed for competitions.

"Stripped of their contexts, removed from place and politics, they are close to autonomous architectural thought," said studio founders Adam Caruso and Peter St John in a text.

"Their simple, almost monumental shapes of extrusions, distortions, and additions are neither obviously sculptural nor dispassionate representations, but somewhere between the two," they continued. "This uncertain balance implies relationships to the endlessly fascinating world of real things."

"These details of construction hold a microcosm of ideas about architecture, as well as ways of thinking that are informed by references and lie latent in the coarse forms of the big models."

The walls of the grand room in the Chicago Cultural Center, the primary venue for this year's biennial, are lined from floor to ceiling with sheets of paper as part of Thomas Demand's contribution to the show.

Printed with a gradient, they lend the walls a panelled appearance that is only at second glance perceived as paper.

The sculptor and photographer is known for his life-sized reconstructions of interior spaces using just paper and cardboard, and a number of photographic prints of his past installations are mounted on the wallpaper.

Alongside them are colour photographs taken by renowned architectural photographer Hélène Binet of buildings in London, Zurich and Lille.

Included is a print that hones in on the decorative tiled floor surrounding a stairwell in the Tate Britain gallery in London, which was renovated by Caruso St John in 2013.

While the majority of exhibitions are hosted at the cultural centre, a number of satellite shows include a retrospective by Skidmore Owings & Merrill at the Mana Contemporary Chicago art centre and a performance by architecture firm SO-IL at the city's Garfield Park Conservatory. 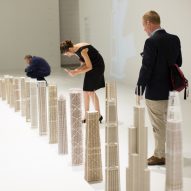