Taking inspiration from the "dirty disruption" created by punk music, Swedish hardcore band Pissjar has designed a typeface made entirely from their own urine.

Originally intended to be used as an image for the sleeve of the band's upcoming album, Apathy & Cheap Thrills, Pissjar bassist Anton Bolin decided to expand the project to include a full alphabet and a complete downloadable typeface.

"I was doing the record cover for our new album and wanted to do something that suits the dirty hardcore punk we play.  So I started to pee a logo and when it was done, I realised that it would be a refreshing typeface for the world to see," Bolin told Dezeen.

The band members took turns to urinate on a series of stretched-out bed sheets over a period of six months. Bolin took photographs of the individual letters, before vectorising them and editing the images using a font software.

Bolin created a custom-built frame and stretched a number of different fabrics – from new material to worn bed sheets – over it to achieve the desired effect. Proceedings were at times hindered by dehydration, he said, and each attempt at a letter needed to be captured within 5 seconds before it "bled out".

"It was so limiting to have to adapt to your bladder," Bolin explained. "On a good day you had three maybe four attempts to create a letter, but mostly I was able to do it two times a day."

"I tried loads of different ways to vectorise it – with a lot of splatter or no splatter at all.  I found out that the best way to keep the typeface consistent was to keep most of the splatter," he added.

"I really like that it is a dirty disruption in a world where everyone tried to be clean, correct and striving to become perfect." 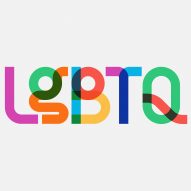