Those taking part – Michael Marriott, James Shaw, Soft Baroque, Oscar Diaz and Ian McIntyre – have each produced pieces that will be sold from, and used at, the Ace Hotel in London's Shoreditch.

Many of the designers, namely Marriott, Shaw and Soft Baroque, have opted to use recycled materials for their products – a trend seen across many exhibitions taking place during the festival.

Marriott's Totem stool will be used inside the hotel's Bulldog Edition Cafe, and is made from waste materials including recycled food packaging.

Flecks of silver seen on the stools are created from yoghurt packets, while its shape is designed to make it easy to move.

"The materials came with the project, they were part of the brief," Marriot told Dezeen. "It's recycled PET, which is basically food packaging trays that have been shredded and sorted and pressed with heat into sheets."

"It's a big heavy lump of black plastic with little flecks of silver in it, and it feels like it's halfway between terrazzo and stone – it's got that density to it."

For his offering, Shaw produced a number of products from recycled plastic, including candlesticks that will be sold in the hotel and cake stands for the coffee shop. He also created a colourful installation for the hotel's entrance, which pairs lush green plants with his "baroque" plastic shapes.

Shaw's production method involves feeding waste plastic pellets through a heated gun, which then extrudes a sausage-shape that is manipulated by hand into different forms.

"This is about introducing the material into the everyday," Shaw told Dezeen. "I find it really interesting when you take an unusual material and put it into everyday life, instead of it just being in design shows and in magazines."

"It's a functional material, but it's not the smooth function of modernism," he said. "I call it the plastic baroque, because it has an attachment to those sorts of themes."

Design duo Soft Baroque has used a new composite material made from recycled sinks and baths, and glass from old TV screens, to create a set of sturdy blue-coloured tables.

The material, described by the duo as a "silicastone", is produced by Lancashire-based company Alusid – and has the properties of natural stone.

The collection is completed by a set of salt and pepper mills by designer Oscar Diaz, and mugs by Ian McIntyre.

Diaz's grinders, designed for the hotel's Hoi Polloi restaurant, are intended to recall a music box and are topped with a brass handle reminiscent of a wind-up mechanism.

McIntyre's ceramic mugs are made from hand-shaped clay. The designer has also created a range of coffee pots which feature a recycled plastic lid.

This is the third time Ready Made Go has taken place inside the Ace Hotel for London Design Festival – which run this year from 16 to 24 September 2017. 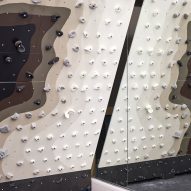 Also for this year's London Design Festival, Camille Walala has installed an inflatable castle in Broadgate, while Sam Jacob has teamed up with MINI to create a micro home with attached library.