London-based artist and designer Zuza Mengham has created a series of five angular sculptures made from mulched British lichens and Jesmonite.

On show at London Design Fair this week as part of London Design Festival 2017, the rock-like vessels are part of a showcase curated by quarterly contemporary craft magazine Hole & Corner that celebrates the fair's inaugural Material of the Year – Jesmonite.

Jesmonite is an acrylic-modified gypsum composite that has become more and more popular with designers, who have used it to make an array of furniture, lighting and vessel designs.

Encased within the Jesmonite, the lichen creates delicate dappling effect across the sculptures' surfaces.

"Lichens seem like something which is pretty abundant but hugely overlooked as part of our environment," said Mengham, who chose to work with the organisms after stumbling across various different species when on a country walk.

"They are sensitive indicators to pollution levels and and different species are more or less tolerant than others. Early Litmus Paper making used Lichen as the dye to indicate the ph levels. It's also historically been used for fabric dyes and some have been used for healing properties."

Mengham, who created a set of crystal-shaped resin sculptures for last year's London Design Festival, told Dezeen: "I wanted to see if I could play with a selected few species which are commonly found in the UK and highlight their characteristics to celebrate these often unnoticed organisms."

For example, the lichen Xanthoria Parietina, distinguished by its bright orange colour which becomes stronger the more it is exposed to sunlight, is used to make a bright orange sculpture with delicate yellow patterning.

"There was quite a bit of experimentation to get the desired effects in the patterns," explained Mengham.

"I tried a few techniques and eventually found the best way to establish the colour ways was to create it first in the liquid part of the Jesmonite component and then I could take parts of this and apply layers repeatedly using the same samples of colours which were all pre-mixed."

Mengham applied the Jesmonite and mulched lichen in layers, building them up within a mould. Mengham allowed the Jesmonite to set gradually before removing the sculptures and then polishing the surfaces to reveal the colorful lichen within. Where more texture was needed ground-up marble was applied to enhance the lichen's furry edges.

"One really interesting thing that we noticed was that different lichens seemed to be growing on different sides of one object or landscape feature," said Mengham. "For example, on a huge neolithic stone monument, we found that each side of the stone had different colours and textures depending on wind and rain direction and which way it would face the sun."

"I wanted to get this across in the sculptures too, so as I was casting the layers I would try to change the colours slightly on each side of the work."

The project has resulted in a series of sculptures that feature bands of colour on their surfaces, and on closer inspection, the lichen's natural patterning can be seen.

Displayed across plinths of various heights  – a reference to how lichens thrive at all levels of the landscape – the sculptures are displayed next to a series of photographs by visual artist Seb Camilleri. The photographs document the pair's lichen-hunting expeditions and capture the lichen in its original habitat, providing the showcase with context.

As one of the main venues for the London Design Festival 2017, this year's London Design Fair brings together a range of exhibitions, designers, brands, pavilions and galleries from across Europe, Asia and North America including a pavilion by US designers, an exhibition of British craft and a showcase of design from South Korea's capital.

Zuza Mengham and Seb Camilleri's installation is on display on the ground floor of Hall G5 at London Design Fair, Old Truman Brewery until 24 September.

The sculptures are available to buy after the fair, with prices starting at £2,300. Camilleri's photographs are also be on sale, each in an edition of three. 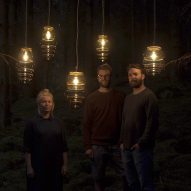 The latest from London Design Festival 2017