This London Design Festival exhibition presents furniture by designers including Ineke Hans and Donna Wilson, alongside labels that show a full breakdown of each item's cost and its impact on world economies.

Fogo Island Shop – an offshoot of the business initiative that led to the construction of the Fogo Island hotel and art studios – is presenting its collection in the Brompton Design District.

Items on display include a chair by Donna Wilson, a bench by Ineke Hans and tables by Nick Herder. Each one is positioned next to an "economic nutrition" label.

The label is broken into two sections – the top provides a breakdown of the production costs, while the bottom shows which countries benefit most from the sale.

"Food nutrition labelling created a revolution in the food industry," said Fogo Island Shop. "We want to spark the same energy for change with the launch of the economic nutrition label."

"We believe that most consumers want to make buying decisions that have a positive impact on ecology, the economy, and culture," the company continued. "Our economic nutrition labels are intended to bring transparency to where the money from your purchase goes – how it will be invested in the local community and how it impacts the broader economy."

Fogo Island is the largest of the offshore islands in the province of Newfoundland and Labrador, Canada. For the last few years, millionaire businesswoman Zita Cobb has been using cutting-edge architecture and design to inject new life into the country's traditional craft industry.

As well as commissioning a series of artist studios on the island, she opened a new hotel and gallery, filled with furniture designs that prolific designers have created in collaboration with local craftspeople.

This led to the establishment of Fogo Island Shop, as a retail platform to sell these designs. Profits from the shop help to sustain the community, which is has an approximate population of just 2,395 people.

"We have made a strategic decision to invest as local as possible in all steps of our development process," said the company.

"We start with availability of inputs on Fogo Island from local suppliers. If not available, we then move to our closest communities on mainland Newfoundland, and then to other suppliers within the province of Newfoundland & Labrador."

If suppliers still cannot be found, they move onto Canada and north America – followed by the rest of the world.

The company,  which is operated by the Shorefast Foundation, claims to be the first to implement economic labelling – but believes the system could be easily adopted by others to improve worldwide conditions.

"We're excited about the potential this practice holds, not only for our business, but for others around the world looking to build a new economic system that offers a better balance between the return on economic capital and the health of diminishing sacredd natural, cultural, social, human, and physical capital," said the company. 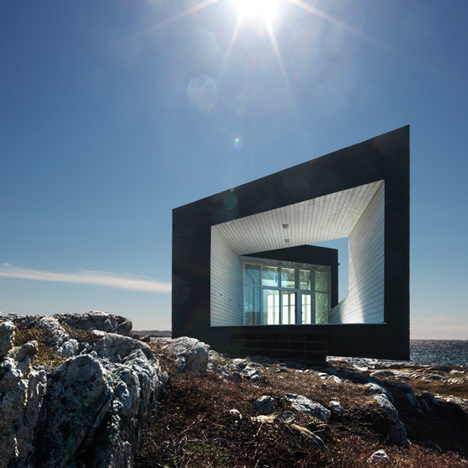 The Economic Nutrition Through Design exhibition, curated by Ineke Hans, is on show until 24 September as part of this year's London Design Festival.

Elsewhere in the city, Lee Broom has created a mirror illusion in his London showroom, and Faye Toogood has curated her own furniture fair featuring the works of 50 artists, designers and architects.