Opinion: Design thinking is the management phrase that makes real designers shudder. Can designers let go and accept it as a form of flattery, or should they be worried about business strategists edging into their territory, asks Lucas Verweij.

In a recent article posted to a LinkedIn group, the experienced British interior designer and writer Anthony Sully ignited a stormy debate about design thinking.

"It's a fraud," he wrote. "It has been invented as a ball of smoke for theoreticians to play with. It requires no training and allows it to have a credence which it doesn't deserve."

In just a few months, his statement has collected more than 1,200 comments about a subject that is seen by many as zeitgesty but meaningless, but by others as a revolutionary approach to problem solving.

Supportive comments included: "Yes, design thinking is manipulative thinking" and "You have expressed what I've been thinking all along but never dared to bring up."

What is design thinking?

Put simply, design thinking is thinking like a designer.

What exactly is design thinking and why does it illicit such an impassioned debate? The idea behind design thinking is to apply the problem-solving methods and techniques commonly found in design to problems and questions outside of the regular design scope. That could be a strategic problem, a development of a service, or even a political issue. Put simply, design thinking is thinking like a designer.

design thinking always works with a strict process, which is very similar to a design process. It has an analytical phase, a brainstorming phase, and a prototyping phase. 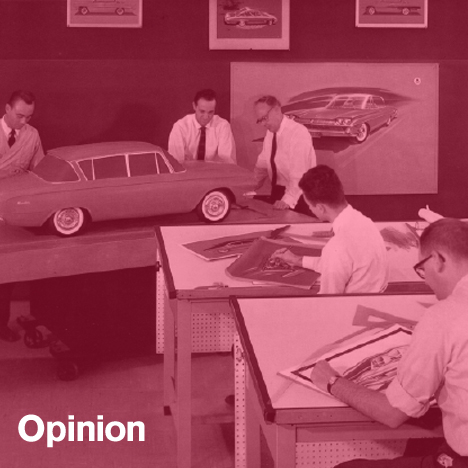 But design thinking is not limited or connected to a production method or a material or craft, so it just isolates the mental part (thinking) of the design process and applies it as problem-solving method. The outcome of design thinking is never a physical product – it's a mental map, managerial advice, or a strategic plan.

Design thinkers mostly have a managerial background. The schools that teach design thinking are business schools, so Thinkers have a different bias than designers. Some designers like to poke fun at design thinkers for simplifying the design process into an excessive number of post-it notes.

Sully's article focused on a somewhat arrogant statement from Tim Brown, from his book Change by Design, which is considered one of the key design thinking publications.

Sully takes rather strong issue with this. "This is anarchy," he wrote. "Non-designers can not pick up and use tools that they have not been trained to use."

Sully's opinion, and the subsequent discussion on LinkedIn, wasn't exceptional. design thinking frequently enrages designers. Some designers react to design thinking the way a bull will react to a red cloth. No other topic has the potential to raise their temper as this one can. design thinking is both hated and loved, both feared and embraced.

Why are designers whining about design thinking? What is it that they fear from it? They might feel threatened because their working method, the design process, is being hi-jacked by others. It is a genuine fear of being deprived – a new group of less-skilled professionals claiming that they are capable of doing what so far had been their profession solely. Nothing is as powerful as the fear that your profession – along with your income – will be taken from you.

The designers' discomposure is therefore understandable. A design process has always been a designer's core activity and reason for existence. Now people who have mostly been educated as managers are appropriating it. And their "leader" Tim Brown is not being very diplomatic. He is outright stating that they have stolen something from designers, and that they're going to give it away to many others.

Yet displacement never comes out of the blue, it is usually the result of an organic development of a professional field. Coal stokers' jobs were endangered once trains began moving with electricity, old-fashioned taxi drivers are protesting now against Uber, which has boomed thanks to navigation devices and smartphones all around.

The same applies to design thinking. It came about when the design workflow evolved into a less tangible process. When the designer became increasingly mentally and theoretically engaged. When the strong ties of design with industrial production were cut. And when society took creativity more seriously, and when it began to play a greater role in the solution and strategies for many problems.

design thinking – the broader use of creative problem solving – has thus been a foreseeable and logical development. design thinking is just one of the extension fields of design. Do designers need to fear that?

Design is not just a mental process that can be learned from a book. Good design does not come by following five consecutive steps and doing some interviews. A good design process is tailor-made; it varies from customer to customer and from project to project.

Why would these designers worry about design thinkers who usually follow a standardised process? design thinking reduces design to the mental, intellectual part of it. The end result is mostly a mind map, a consultancy, a schedule, or perhaps a paper prototype. It is rarely a woven fabric, a piece of furniture, an interior, a colour scheme or a logo.

Where design is tactile, design is also physical. On top of that, design is a skill, and is twined with different crafts. So don't worry designers. You can do design thinking on the side.

Lucas Verweij has been teaching at schools of design and architecture around Europe for over 20 years. He was director of a master's programme in architecture and initiated a masters course in design. He is currently professor at the School of Form and teaches master's students at Design Academy Eindhoven. He has initiated and moderated various seminars devoted to designing design education.