A group of 13 designers has come together to present a diverse selection of projects all themed around water during this year's London Design Festival.

Each designer has produced a new work for the 13 Ways with Water exhibition, addressing the substance's material properties in their own individual manner. Some have focussed on its movements and optical effects, while others have explored its calming auditory properties.

As a result, the show features a range of works incorporating ceramics, robotics, lighting, and interactive installations, which are on display as part of London Design Festival at the Copeland Gallery in Peckham until 24 September 2017.

The group of designers were only given the single-word subject as their guideline. The show's organisers – Unit Lab, Dean Brown and Kirsi Enkovaara – felt that the more open the brief, the more diverse the results would be.

"We consciously kept the theme open, to let each designer carve out their interest from the myriad possibilities," said Mike Vanis, co-founder of Unit Lab. "The designers have a diverse range of backgrounds and disciplines, so we're going to get very different interpretations on the theme."

The water-influenced pieces on display are meant to emphasise how vital the element is to both nature and humans, bringing attention to the "essential yet invisible" substance that, according to Vanis, is so fundamental that everyone takes it for granted.

Among participants is London-based industrial designer Fernando Laposse, who has used water as a reactive chemical in his Mining piece. He combines the liquid with calcium carbide to create a flame – a process used to ignite 19th-century miners' lamps.

The work is made up of a gas lamp in brass and blown glass, and comments on the social and ecological consequences that come with using such a large amount of water in the process of metal mining.

Andy Sheen's Kinetic Light installation examines water's ability to generate energy, using the sole force of a waterfall to power lights that illuminate to allude to the liquid's refractive properties.

Described by Unit Lab as "a story told in objects", the studio's Domestic Sea Collection attempts to bring the feeling of being by the sea into the urban home, by slightly altering everyday objects to reference the seashore environment.

The objects include a pair of headphones with ear cushions replaced with seashells, sand-washed glassware resembling sea-glass, and a carpet that mimics the wash of the tide.

These three examples are on display alongside the 10 other designs in a disused warehouse, which has been transformed into a space for artists and makers as part of Peckham's Bussey Building complex.

The exhibition is also accompanied by a series of public events, including tours, talks, short film screenings and a family workshop. 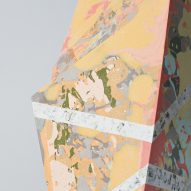