A plaster made of sand and straw has been sprayed across the walls of this house, which was built in a village in Iran by local firm BAM Architects Office.

BAM Architects Office designed the residence for a retired man who wanted to escape the busy life in Isfahan – the capital city of Iran's central Isfahan Province. He chose to settle in Parvaneh, a nearby rural village reported to have just 202 residents in the 2006 census.

The studio, which is based in Isfahan, developed the plaster from a mix of sand, cement, limestone, straw and a local stone powder. Quantities were tested for one week on site before it was sprayed across the walls of the house.

Having seen many of the new builds in similar rural villages copying 18th-century neoclassical architecture, the studio chose the finish to provide the likeness of the village's vernacular .

The rough texture of the plaster mimics adobe – one of the earliest building materials, which is made of straw and dung. As a result, it features similarities with neighbouring structures, which appear to be run down, as well as the hues of the surrounding sandy-coloured desert stone.

"We wanted something more local for him," architect Babak Payvasteh told Dezeen. "We told him that we should keep on historical continuity in the villages, otherwise we will lose our great architectural heritages in villages."

The U-shape floor plan of the residence wraps a central garden, so it was named Through Gardens House. The layout references the traditional courtyard houses of Iran, providing benefits of extra daylight and natural ventilation in the desert climate.

To make the most of these, the walls around the courtyard are fitted with large windows, while the tops are punctured with rectangular openings to bring in fresh air.

"Although using a courtyard is a fundamental solution to Iranian architecture, recently many people neglect it," said the studio. "We tried to use a historical content into the contemporary form."

Brickwork steps wrap the gravelled yard to lead down from inside the house, as well as forming benches for the resident to sit in the garden. Bricks also form a wall for a large planter where trees are grown.

The majority of the residence is located on the ground floor overlooking the courtyard. Bedrooms and the bathroom are situated on one side, with a hall connecting to the open-plan kitchen, living and dining room on the other.

The base of the kitchen island and counter are made of bricks, as a nod to the brickwork outside. A glazed wall on the other side of the kitchen opens to a narrow terrace with a barbecue at the rear of the residence.

Another room on the first floor is flanked on either side by terraces.

Aside from a few touches of brick, monochrome finishes are used to provide a contrast to the colours and textures outside the house.

Pale finished include the tiles covering the floor and the white-painted brickwork walls. Other walls are covered in a white stucco that offers a blank backdrop for the resident's artwork.

Touches of black are provided by the kitchen counter tops and the a cupboard built under the staircase.

Payvasteh runs the architecture studio with his wife Maliheh Salimi – BAM is an acronym for Babak and Maliheh.

The architect told Dezeen that most of its projects are similarly located in villages just outside of the city.

Last year saw a boom in Iranian architecture, as local architects became more adventurous after the lifting of crippling economic sanctions. Some of the best examples include an office with a wavy brick facade and a house comprised of a stack of white boxes angled in different directions. 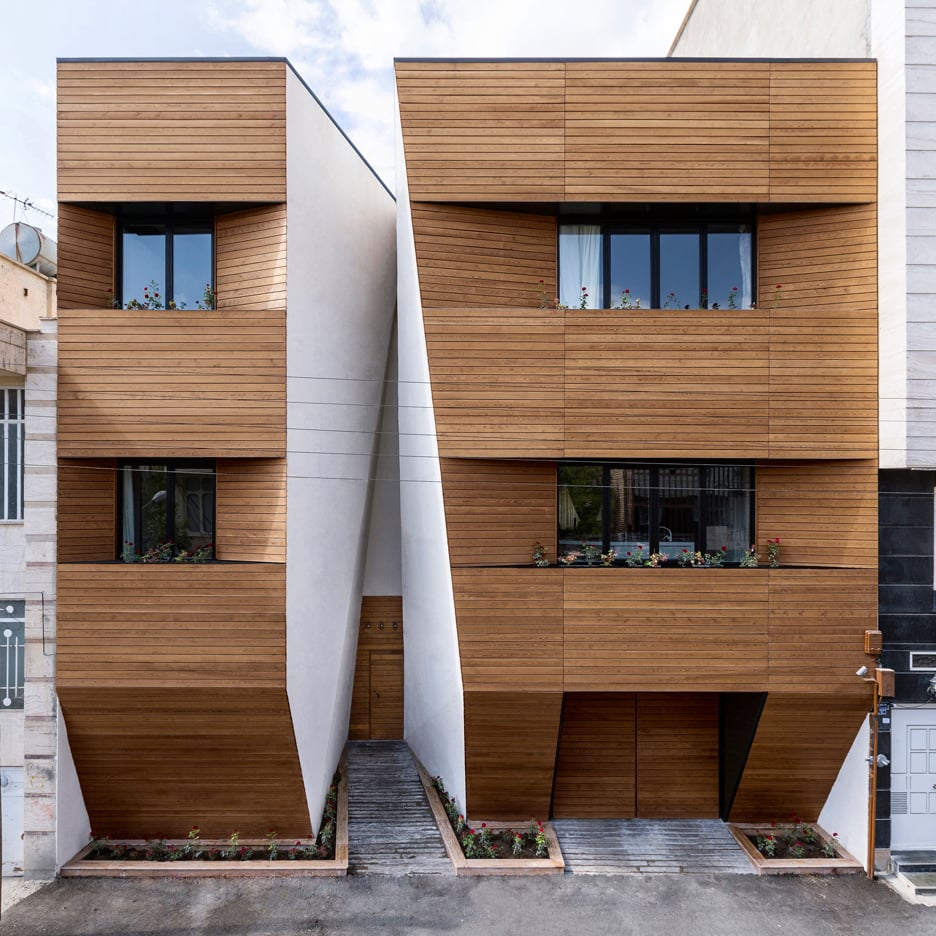 Photography is by Tahsin Baladi.