Perched on the edge of a village by the Sea of Galilee in Israel, this house by Golany Architects features numerous balconies that can be shaded by rolling wooden screens.

Set on the slopes of the Jordan Rift Valley, Golany Architects wanted to make the most of the potential views out over the Sea of Galilee when designing the home.

On an early site visit the Tel Aviv-based architects set up a ladder on the empty lot and climbed it to determine the minimum level they could build to achieve maximum vistas.

Floor-to-ceiling glazing on both levels provides far-reaching views out over the garden, across the fields of the village and down to the inland Sea of Galilee to the front, and Mount Canaan to the rear.

The linear design of the shutters is clean and modern, but is in fact inspired by traditional Mashrabiya architecture. Carved wooden latticework on the side of buildings has been used in architecture in the Mediterranean and Islamic world since the 12th century. The earliest examples have been found in Baghdad in Iraq, dating from the Abbasid period.

The wooden screens are a simple but effective way of adapting buildings to the environment of the region. The shutter effect filters the sun, allowing it to illuminate the interior but deflecting the harshest rays and keeping the rooms cool. They also double as a privacy screen.

The windows and doors are recessed slightly from the outer facade of the shutters, creating an envelope that helps keep the house naturally cool even during the hottest summer days in the valley.

The space between the wall and the shutters can be used as indoor-outdoor balconies on both levels, extending the living area and the family room respectively.

With only a lot measuring 500 square metres, the architects maximised the outdoor space by splitting the house over two floors and building on only 200 square metres. Along with the bedrooms, the first floor features an outdoor, pergola-shaded terrace.

The materials used for the building were carefully chosen to reference and blend in with the surrounding landscape.

The cement, textured plaster, timber shutters, wooden ceiling beams and stone paving slabs were all realised in a palette of yellows and browns to match the soil of the olive and carob groves.

The house was built around the mature trees already in situ on the plot of land, including the cypress tree at the corner of a lot and the oak by what is now the living room.

Rosemary, lavender and spice plants were planted between the rocks, and horses graze freely on the surrounding land. 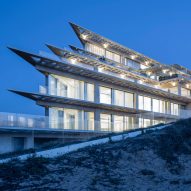