Architects Mauricio Pezo and Sofia von Ellrichshausen, and artist Felice Varini designed the temporary outdoor structure to "bring new life" to Trinity Square, the former home of one of the city's biggest markets.

The project was commissioned by the RIBA and Hull UK City of Culture 2017 – an award presented every four years to a city, to celebrate its cultural offerings. The aim is to encourage locals to experience a familiar part of their city anew, and also create an attraction for tourists.

The galvanised steel cylinders are laid out in a grid formation, and each one is open to the sky. The towers are also punctured with rectangular holes, which cast patterns of light and shadows across the space.

Visitors can witness these interplays of light from inside the structures, while also enjoying different perspectives of the surrounding square. The project title Trois Points de Vue, which translates as Three Points of View, references this.

Additionally, op-art specialist Varini has painted curved and straight lines in white across all of the structures, which align to form complete geometric patterns when viewed from specific angles.

This design is characteristic of Varini, who has previously used anamorphic illusions to transform spaces like the roof terrace of Le Corbusier's Unité d'Habitation.

"The empty stone-paved square is challenged by the size and disposition of a regular open grid and each column is, in fact, an inhabitable room with a single entrance pointed to a different direction," said Pezo and Von Ellrichshausen, whose previous projects include a pavilion made up of overlapping cylinders.

"The silent vibration of glimmering lights and shadows, together with the very indifference of the grid, is altered by three delicate motives drawn in the air by Varini, which can only be seen towards precise vanishing points," they added.

Varini and Pezo von Ellrichshausen were chosen out of 18 up-and-coming and established design teams from around the world to create the temporary installation, which was officially revealed to the public on 2 October 2017.

Marie Bak Mortensen, RIBA head of exhibitions said: "The installation effortlessly fulfils the commission's aim to push the boundaries of how we observe art, architecture and public spaces, and to facilitate unique experiences for residents and newcomers to the city."

The project is supported by the British Council and forms part of Hull 2017's Look Up programme, a series of temporary public art installations around the city. 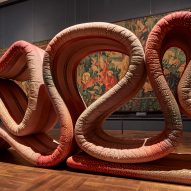