Dimore Studio took cues from the decadent 1960s nightlife spots on the French Riviera for the rose-tinted interiors of this new restaurant at a west London members' club.

Located on the lower-ground floor of members-only institution The Arts Club in Mayfair, Leo's will act as a dining and clubbing venue, as well as a space to host creative talks.

Milan-based design office Dimore Studio, which is led by Britt Moran and Emiliano Salci, was tasked with the designing the new interiors. The Arts Club was founded in 1863 in a Georgian townhouse on Dover Street, and this is the most significant internal change since a major overhaul in 2011.

Moran and Salci looked back to the 1960s for inspiration, aiming to reinterpret the retro style of the era's Riviera clubs in a modern and "eclectic" manner.

"A mix of contemporary, retro and oriental elements, combined with mirrors and light, shaped a soft, unusual and sophisticated environment," said the pair.

Dark pink velvet has been used to upholster the barstools, while green Guatemalan marble forms the countertop of the bar. Additionally, several of the tables have lacquered enamel surfaces, with brushed brass bases.

A cognac leather sofa wraps around the perimeter of the club's undulating corrugated wall, creating a series of booths. At the centre of each hangs a flower-patterned lantern, which the studio added to reference oriental style.

This is echoed on the venue's stage, which boasts a bamboo curtain hand-painted with lotus blossoms.

For Leo's rich colour palette of blush pinks, burnt oranges and forest greens, Dimore Studio was influenced by In the Mood for Love, a Chinese romance film released in the year 2000 that features similarly hued scenery.

"A sensual and intimate setting made of warm colours conveyed a feeling of blurred and indistinct memory, inspired by the fascinating environments of [the film]," said the designers. 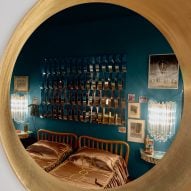