Ahead of this year's London Design Festival, Emiliano Salci and Britt Moran of Milan-based Dimore Studio have created a dressing room, a living room, a dining room, a bedroom and a bathroom inside London art gallery Mazzoleni.

The project – which is actually credited to the duo's spinoff company Dimore Gallery – is designed to create a more appropriate setting for the gallery's collection of post-war Italian art. Called (Un)Comfort Zone, the installation is intended to combine the "elegance" of 1930s art deco with the "sexiness" of the 1970s.

Rooms include a mix of vintage and contemporary furniture and lighting by Dimore Studio, along with richly coloured carpets and paintwork.

Moran and Salci have been making waves in the design industry, by offering an alternative to the minimalism that has dominated the interior design market.

(Un)Comfort Zone follows from the duo's Milan design week installations, which saw them showcase their designs in moodily coloured spaces that merged design eras. This time, the pair have also added clues as to the resident's who might occupy the spaces, like empty beer bottles, pill boxes and magazine.

"Emiliano and I, we think up a world that we try to create," Moran told Dezeen at the exhibition's launch earlier this week."We've tried to push it a little more and make it almost like a set design for a cinema piece."

Visitors become house guests in the exhibition, glimpsing the rooms through porthole-like windows lined with bronze. Only the dressing room in the gallery's front window can be seen as a whole.

"The idea is to give the guest here when they come to visit the chance to look into to someone's life," said Moran.

"We've kind of given you some elements to think about and you can kind of come up with your own storyline to see what's happening and think about it," he continued.

The front dressing room features both Dimore Studio's mirrored wooden cabinet with a decorative top, called Armadio 098, and its standing metal and bronze lamp, as wells a curved wooden dressing with metallic curtains below.

The selection is complemented by glittering golden walls and a pink oil painting, created by artist Paolo Scheggi in 1969.

Twin beds in the bedroom both feature a 1950s, curved wooden frame and satin bedsheets, with 1960s Venine chandeliers either side. Grey, green and purple hues in the carpet are picked to complement tones in the artwork.

Other spaces in the exhibition include a pale pink bathroom, including a suite by Italian designer Gio Ponti, and a flowering wall lamp.

A large painted silk light by Dimore Studio is suspended above a round dining room by Italian architect Ignazio Gardella, which is complemented by black and white artwork.

(Un)Comfort Zone coincides with this year's London Design Festival, taking place in the capital from 16 to 24 September 2017. It forms part of Mazzoleni Invites, an ongoing project that sees Mazzoleni work with architects, designers and fashion designers to create installations in its galleries.

American designer Britt Moran and Italian designer Emilio Salci founded Dimore Studio in Milan in 2003. Other past projects by the studio include the interior for an Aesop store in Milan, which contrasts green-coloured subway tiles with lemon-yellow shelving. 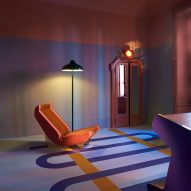 Images are courtesy of Dimore Gallery and Mazzoleni.