A supermarket filled with waste products and an overview of Norway's hottest young designers are among design reporter Alice Morby's pick of the best exhibitions at the Ventura Lambrate district during Milan design week last month.

Dezeen was the main media partner for Ventura Lambrate, one of the longest running design districts in Milan's Fuorisalone – the programme of events that accompany the Salone del Mobile furniture fair.

Located in Lambrate, northeast of the city centre, the district puts a focus on emerging designers and radical ideas. Now in its seventh year, it has become a staple on the design week circuit.

This year the organisers also launched a new district, Ventura Centrale, in abandoned warehouses at Milan Central Station. Dezeen also partnered with this exhibition, which featured a modernist merry-go-round by Lee Broom and totem-like glass lamps by Luca Nichetto.

Here's our pick of the best five exhibitions at Ventura Lambrate:

This year's exhibition of Norwegian design was curated by designer and interior architect Katrin Greiling, who used the work of 30 designers to showcase the journey from maker to market.

Presented against a calming backdrop of pale blue, separated by ochre-coloured curtains, the show featured geometric lamps by Sverre Uhnger and perfumed objects by Kaja Dahl.

Find out more about Everything is Connected ›

Students from Design School Kolding in Denmark highlighted the amount of waste material created by the design industry with their Super Supermarket exhibition, which they describe as a "sarcastic commentary to our consumer culture".

Shelves displayed products made from residual materials donated by a variety of Danish companies – customers were able to purchase loo roll made from Fritz Hansen's leather scraps or Kvadrat fabric desserts.

Elements of Time by Nynke Koster

The project focused on fragments of buildings from different architectural periods, which were transformed into rubbery, soft elements that visitors could touch and sit on.

"I've created my own hybrids and misfits using IKEA furniture," she told Dezeen. "It's about the connection to a childlike imagination that I'm trying to reconnect to through IKEA products."

Find out more about Enfant Terrible ›

Glass Cares by OFF Portugal

Ten different glassware pieces were on display at this exhibition, all of which were designed and completed during a two-day workshop in Portugal's Marinha Grande region, which is known for its glass blowing.

The project was initiated by OFF Portugal – an organisation set up to support young Portuguese designers, by partnering them with local manufacturers and craftspeople to reinterpret traditional techniques.

Find out more about Glass Cares › 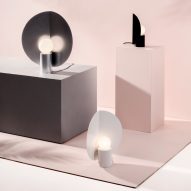 Eight of the most promising designers from this year's Salone Satellite