Students at this new Snøhetta-designed Faculty of Fine Art, Music and Design in Bergen are invited to use the inner walls as a canvas for their work.

The Norwegian architecture firm won a competition to design the faculty in 2005 and completed it earlier this year. The students have just moved in to their new space in the Kunst Musikk Design (KMD), part of the Bergen Academy of Art and and Design.

Each student is assigned a studio-cubicle on a termly basis, to use how they see fit. Snøhetta was delighted to see how quickly they took over the space, with one student already occupying an empty shower stall with a piano.

"Before architecture is used it is just a monument," Snøhetta co-founder Kjetil Trædal Thorsen told Dezeen during a tour of the building on Wednesday. "It needs people to become a tool."

The recycled aluminium facade reflects the changing light throughout the day and responds to the changeable weather of Bergen, on the west coast of Norway.

A project hall has been placed at the centre of the building on the first floor overlooking the foyer, with a bridge running along the large glass windows in the facade.

The building is designed in accordance with PassivHaus standards and the hall regulates its own internal climate, which fluctuates between 15 and 25 degrees depending on the season.

The interior surfaces of the school remains unfinished and available for students to work on and with. The project hall floor is made from 140,000 blocks of whitened pinewood that naturally re-seals itself if nails are hammered into it then removed.

"There are no surfaces, only materiality," said Thorsen. "And the materiality has to work!"

Snøhetta designed the building as a tool for education, and by focusing on materiality rather than surface they hope to help its occupants learn that art is as much about the process as the finished product.

Wooden panels line the walls of the double-height volume. Graduated perforations in the panels control the acoustics, but the bottom two panels around the width of the hall have been left plain. Students can use the panels as an art surface, and they can be flipped round or switched out as needed.

Strong welded panels form the balustrade around the project hall and bridge. Weld marks are still visible on the exterior in varying degrees, depending on wether the panel was worked on by the master welder or one of their students.

The tool workshop is open to students, who are trained to use the latest equipment, including 3D printers. Electricity outlets hang on retractable cords from the ceilings so students and teachers can plug in almost anywhere.

The KMD is located in a former industrial area of Bergen, and the building stands on the site of the former Munck crane factory. One of the original cranes has been preserved in the building. It hangs above the project hall and can be used to lift heavy materials and artworks in and out of the main foyer.

The concrete blocks that line the stairwells have been left bare, and bear the marks made from having being cast on some of Bergen's many rainy days. Industrial style metal stair treads were set into the flights during the casting process, with any "mistakes" such as uneven blobs left uncovered.

The stairwells also double as a gallery space. Every state building in Norway is assigned a public art budget, so KMD decided to use theirs to start a collection of sketches from their alumni.

Called Ephemeral: Permanent Collection, vice-dean Anne Helen Mydland said the university sees it as a "challenge" to keep engaging with their student body both past and present.

The KMD only formed in 1996 following a merger of the city's two arts institutions, but arts education has a long history in Bergen, where the first art school was established in 1772.

The university doesn't offer set courses according to discipline, and students are encouraged to pursue hybrid practices during their programs. This is reflected in the logo, which collapses down the separate words to one indistinguishable symbol.

As well as being throughly art student-proof, the building has been designed to a future-forward method Thorsen calls a "redundancy model".

Fostering links between the faculty with the city and the students with its citizens was an important part of the brief. The entrance to the building faces out on to the Kunstallmenningen, a plaza open to the public leading down to the waters edge, forming a "cultural axis".

Aside from low-lying a pavilion that will eventually house a coffee shop, there are no buildings to obstruct the sightline between the faculty and the city centre. Glass walled boxes protrude from the facade, giving students an area to display their work to the public.

The cafe is a community space, and the KMD holds a series of lectures open to both students and residents throughout the school year.

Estimated to have cost around 1.1 billion Krone (£105 million), the facility is entirely state funded. All students, including those from overseas, only pay a £80 registration fee per term, and only half of the available living stipend must be repaid after gaining their degree.

Much has been made of the so-called "Nordic model", where social democracy in an oil-rich nation has seen Norway transform from one of Europe's poorest countries to one of its wealthiest and yet most equal.

Several of the toilets on each floor are gender neutral, denoted by a stylised fusing of the standard 'male' and 'female' symbols.

While other countries continue to get their knickers in a twist over who uses what bathroom, for Thorsen, including this in the design wasn't the political issue so much as practical one. "It saved space," he shrugged.

It's actually written in to the Norwegian constitution that anyone can knock on a stranger's door to ask to use their bathroom and be allowed access.

"There's no such thing as the 'Nordic model'," he added. "It's about the attitude rather than the design."

Further up the coast, Snøhetta have recently designed the stone arches for the entrances to the Stad Shipping Tunnel, a 1.7-kilometre channel through the Stad peninsula that will allow container ships to pass through instead of risking the dangerous open sea journey.

The firm has also unveiled plans to transform an abandoned paper mill on Oregan's waterfront into a cultural complex with views out over the Willamette Falls, North America's second largest waterfall. 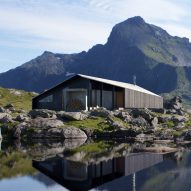