Dezeen has teamed up with the Architecture Foundation in London to give readers a chance to win one of five limited-edition T-shirts, designed by architects including AOC, Interrobang and former FAT director Charles Holland.

Charles Holland Architects has created a design based on a section through a Doric column – a typical feature in the architecture of Ancient Greece.

AOC has created a play on Breton stripes, with a T-shirt that uses "typical wall build-ups" to form a striped effect, while Interrobang used CAD to create patterns of ammonite fossils.

The Architecture Foundation has also designed two T-shirts in-house, one dotted with CAD-drawn trees and one featuring a pattern used to represent concrete.

Screen-printed locally in Bermondsey, all five designs were made using water-based inks on cotton fabric.

Five winners will each win one T-shirt, in either small or medium size, and there is one of each available. They can also be purchased via the Architecture Foundation's website, for £20 each.

All sales of the T-shirts will help support the Architecture Foundation's work. 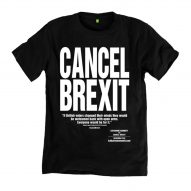