The new facility is located within Le Quartier Central, a new mixed-use development in the German city's Derendorf neighbourhood that was previously occupied by a rail freight yard.

The yard ceased operations in the 1990s and the site was sold to a developer that worked with the city council on a plan to create a new district featuring accommodation, commercial buildings, offices, hotels and restaurants.

The university building displays the influence of the site's former use as a rail yard in its facade elements that recall tracks, bridges, ramps and pedestrian connections, while the infrastructure of industry is evoked by its exaggerated external circulation.

"The building can accommodate around 1,500 students," said the studio in a project statement.

A platform that extends from the front of the building to meet a nearby bridge forms a connection between the university and the surrounding urban context.

Staircases and fire-escape balconies are carved into the facades or protrude outwards to enhance the sculptural form.

The arrangement of these infrastructural elements around the edges of the building allows the main circulation areas to be more compact and therefore frees up more of the interior for teaching spaces.

External stairs connect with curved balconies that bulge outwards from the facades to create more efficient escape routes for the upper floors.

Smooth metal panels flow across the entire exterior in horizontal bands that link up where the stairs are located and wrap around openings containing the windows.

The smooth, sculptural forms are common in many projects by Jürgen Mayer H's studio, including a house near Stuttgart that resembles a dinosaur's head, and an installation comprising huge fluid forms that children can climb on at Volkswagen's visitor centre in Wolfsburg.

The staircase's slatted metal balustrade follows the meandering form of the staircase and provides a delicate counterpoint to the robust concrete floor and steps.

Administration facilities and a student information centre situated on the fourth floor are separated from the academic levels below.

A two-storey underground car park for 360 cars extends beneath the building and under an 8,000-square-metre park that surrounds the university. 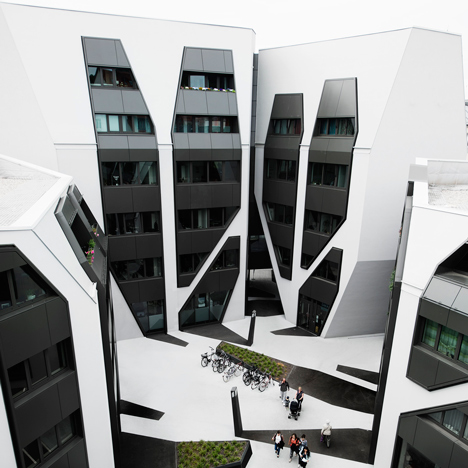